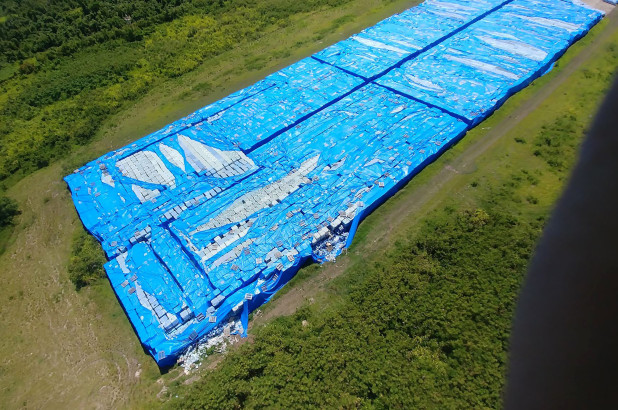 A photographer working for a Puerto Rican police agency posted photos online Tuesday that he said showed a stockpile of bottled water on a runway in the city of Ceiba that had gone unused for about a year.

The water was believed to be part of relief efforts after Hurricane Maria wrought devastation on the US territory last September. The photographer, Abdiel Santana, said he first spotted the stockpile of what could be millions of water bottles last year but took the photos after seeing it in the same place during a recent trip to the island.


A photo showing the bottles in boxes and covered in a blue tarp on a runway in Ceiba was shared widely on social media Tuesday evening.

“Although you don’t believe it… almost a million boxes of water that were never delivered to the villages,” posted Abdiel Santana, a photographer working for a Puerto Rican state police agency who took the pictures. “Is there anyone who can explain this?”

Celebrity chef  José Andrés, who brought a crew of volunteers to help feed victims of Maria in the wake of the storm, called for an “official independent investigation” into what happened to the stash of drinking water.

“My teams knew about it but first they will say, ‘no we can not use them,’ months later water was no good for human consumption,” he tweeted. “We were ‘buying’ water because they wouldn’t give it to us.” He didn’t specify who “they” was.

The bottles were provided by the US Federal Emergency Management Agency and turned over to the central government last year, according to the CBS News correspondent David Begnaud, who first reported on the revelation.

"The water was kept in an area that was pretty hard hit during the storm and could have used all the water they could have gotten," Begnaud said in a video report.