In the video, Glover's animated self (who goes by stage name Childish Gambino) walks through a neighborhood on a hot summer day. The block is filled with celebrities who have been dominating the headlines in recent weeks.


The vid was produced for C.G.'s song, "Feels Like Summer," and it's pretty great. Drake is chasing after Future as he rides away on a bike. And then there's Nicki Minaj, who famously has beef with Travis Scott because he topped her on the Billboard charts. Nicki and Travis make peace by playing with blocks.

The cameo includes West, who wears a red "Make America Great Again" cap as tears run down his face. That is, until Michelle Obama wraps her arms around the rapper and gives him a big hug. 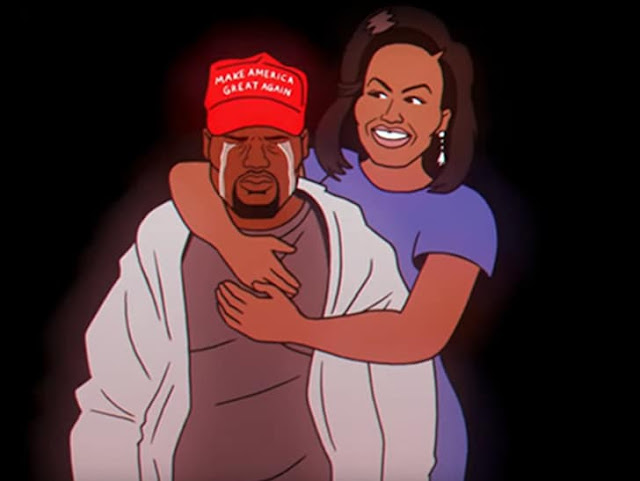 West was embroiled in controversy in May after saying slavery "sounds like a choice" during a puzzling interview with TMZ Live. "You were there for 400 years and it's all of y'all. It's like we're mentally imprisoned," he insisted at the time.

West got emotional while apologizing for his slavery remarks on Chicago’s WGCI 107.5 last week, which the music video may be referencing: "I want to take this moment right now to say that I'm sorry for hurting, I'm sorry for the one-two effect of the MAGA hat into the slave comment."