Raccoons break into Toronto woman’s house, gave her a cold stare while eating her bread

No Comments
It was a night like any other when the raccoons made their move.

Toronto resident Jenny Serwylo had enjoyed a quiet evening at home Tuesday and had gone to bed when she was startled awake by noises coming from her kitchen. 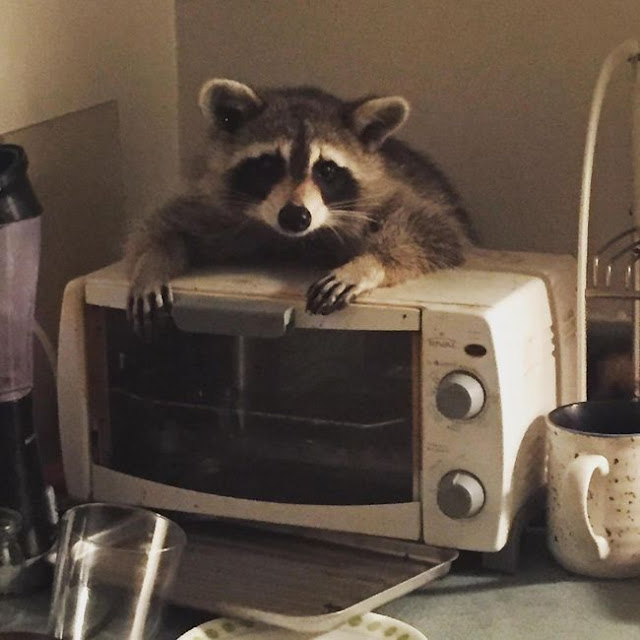 “I was growling at him and hissing at him, trying to scare him out, but he wasn’t having any of it,” Jenny Serwylo said.

The culprit? Three raccoons had broken through her window screen. The target? Her bread.

Leaping into action with a broom, Serwylo made enough of a commotion that two of the bandits decided the goods weren’t worth it. But the third simply stared at her from behind her toaster oven, defiantly gnawing on her English muffins.

Jenny says: “I’d always heard that raccoons were really bold, when I got closer to him he would shrink away a bit, but other than that he fully come out from behind the toaster oven, went to the floor and started eating the cat food.

“I was shooing him with the broom and he just grabbed onto the broom or swiped it away.

Eventually, Serwylo called 311, hoping the city would be able to give her some advice. They told her to try to find a 24-hour wildlife removal company. She couldn’t get through to any.

Serwylo’s standoff lasted over half-an-hour, she said. “I was growling at him and hissing at him, trying to scare him out, but he wasn’t having any of it.”

Occasionally he would even grab the broom handle she was pointing at him and “yank it really hard,” she said.

Finally, after he had eaten literally all the bread in her house, the last holdout got up and calmly walked back through her window, which she quickly locked.

That didn’t stop the group from spending the next two hours scratching to get back in.

The experience was “hilarious,” she said, if also a little scary.