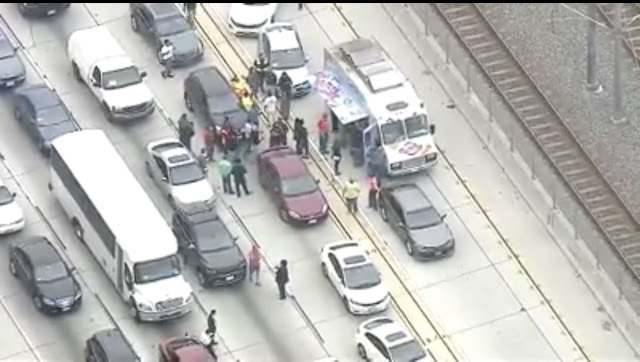 Thousands of people in Los Angeles were detoured off of the 105 freeway Friday morning due to a tanker truck crash. Those unable to get off the road in time were stuck in a bumper to bumper traffic jam, so a couple of savvy commuters decided to make the best out of a bad situation.

In a video shared by Fox 11 Los Angeles, commuters can be spotted trying to turn their cars around, in an effort to clear the jam. Others can be seen ditching their cars altogether and heading to the food truck for sustenance.


Clearly the food truck sensed that drivers were in need of a pick-me-up.

A taco food truck stranded in the mess cruised into the middle of it all using the carpool lanes and started serving food to the hungry drivers. They jumped in to make some sales and served all of their food at half price as a gesture of goodwill.

A few Twitter users captured their experiences on social media. Chris Keller was able to get a shot of the food truck, the stopped cars, people getting food, and the firey accident itself in the distance.

Been on the westbound 105 since 5:15 am because of tanker truck fire. Making friends and keeping things light thanks to AC Catering. Like the small town diner, here’s where you find the latest news. pic.twitter.com/RbQjkjOm2X
— Chris Keller (@ChrisLKellerLAT) August 24, 2018

Sadly, traffic was detoured due to a fiery crash involving a tanker truck and an SUV that occurred on the freeway, killing two people earlier in the morning, according to Fox 11 Los Angeles.