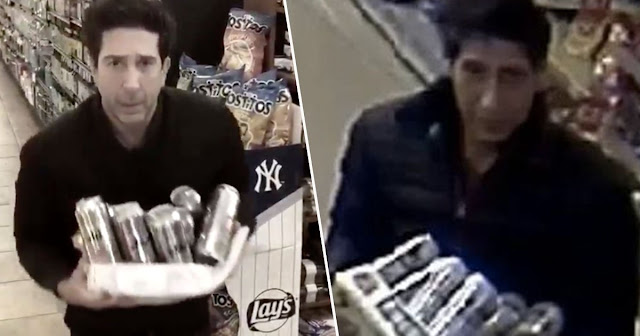 You may have heard that a thief who looks uncannily like Ross from Friends was spotted in Blackpool nicking a crate of beer.

In a later update, Blackpool Police also joined in on the joke, commenting: "Thank you to everyone for your speedy responses. We have investigated this matter thoroughly and have confirmed that David Schwimmer was in America on this date. We're so sorry it has to be this way."

And now, through the power of the viral age, the news has even reached David Schwimmer - who played Ross in the long-running sitcom.

Tweeting the hashtag #itwasntme, Schwimmer wrote: "Officers, I swear it wasn't me. As you can see, I was in New York. To the hardworking Blackpool Police, good luck with the investigation."

Officers, I swear it wasn't me.
As you can see, I was in New York.
To the hardworking Blackpool Police, good luck with the investigation.#itwasntme pic.twitter.com/EDFF9dZoYR
— schwim (@DavidSchwimmer) October 24, 2018


In Blackpool Police's original Facebook post, they shared a still from CCTV footage, writing: "Do you recognise this man? We want to speak to him in relation to a theft at a Blackpool restaurant on the 20th September.

As you could imagine, within no time at all, the comments thread on Blackpool Police's photo became a place to remember the character's best bits on the show.

"Could he BE any more like Ross," one person wrote.

"Clearly stole the cans when the security guard was ON A BREAK!!" another said.

Someone else commented: "Well it's a bit difficult. He's on a break, someone ate is sandwich and the fossil he found wasn't a rare one. Now he's frustrated and wants to get drunk and even that went wrong."

But our favourite might just be The One With The Unagi Reference, which said: "Please approach with caution. He is known to have studied Karate and we believe he has mastered the art of Unagi, the state of total awareness."

Now that the image has reached the States, surely the Ross-lookalike is just moments away from being caught?