Donald Trump Has Visited The Golf Course 159 times as President 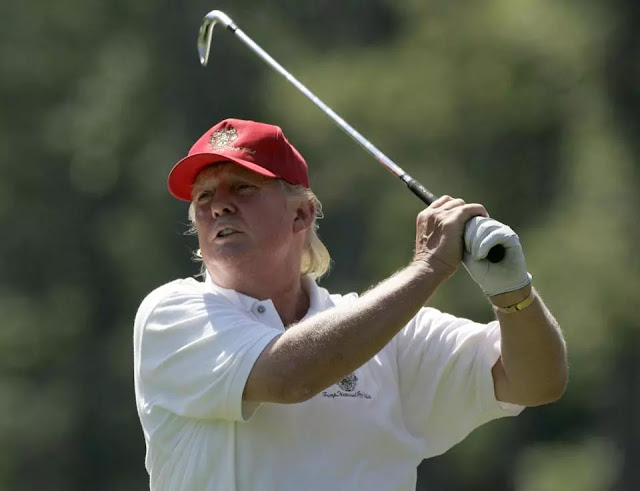 Donald Trump paid an Oct. 7 visit to Trump National Golf Club, Washington, D.C. in northern Virginia, representing the 158th time the 45th President has visited one of his 17 golf clubs (and, for most of them, presumably played some golf) since becoming President on Jan. 20, 2017. He has now paid 159 visits to any golf course as President.

Trump is spending Sunday at his D.C. area golf club after the confirmation vote for Supreme Court justice nominee Brett Kavanaugh. Donald Trump has been on a golf course to cover at least some portion of a day for 25.5 percent of his presidency.

Trump did not play golf on Saturday so he would not be seen playing golf while his consequential second Supreme Court nominee was narrowly confirmed.

The White House doesn't typically acknowledge Trump was even playing golf. That is commonplace policy, particularly when Trump isn't playing with celebrities or pro golfers or doesn't have something to flaunt. Typically, the White House press pool indicates when Trump arrives at his golf clubs, then they are held in a holding location until Trump is done and moves to his next location.

All but one round of golf has been at his clubs, playing once in Japan in Nov. 2017 with Japanese prime minister Shinzo Abe and Japanese star pro Hideki Matsuyama.

The Trump Administration, per typical policy, does not acknowledge that Trump is playing even a hole of golf, much less an 18-hole round. However, if he's going to the golf club for about 4-5 hours, you can be pretty sure he's playing golf. Oregon Sen. Ron Wyden has asked the White House to provide the names of Trump's golf partners, as well for his clubs to provide visitor logs to get a sense of when Trump has played golf and with whom.

The President is certainly entitled to some leisure time, and golf has been an outlet for most Commanders-in-Chief dating back to the early 20th century. However, the reluctance to even acknowledge that this President plays golf conflicts with his almost relentless criticism of his predecessor, Barack Obama, who played an estimated 333 rounds of golf as President.