Most Breathtaking And World-Class Airport for the Apocalypse

No Comments
New Orleans is building a state-of-the-art, billion-dollar terminal. But is it planning for a future doomed by climate change? 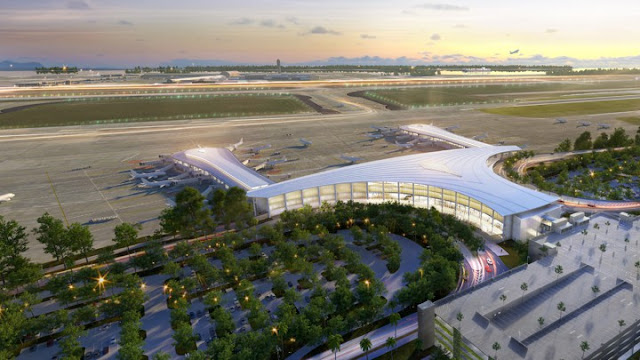 Stocking up on supplies—water, batteries, food staples—as Tropical Storm Gordon loomed over the Gulf, I was struck by a familiar sound in the sky as I loaded bags into my car: a bank of airliners forming a loose arc as they slanted down toward the airport, descending one at a time to land. While the city of New Orleans braced for the worst, life at the airport went on as usual.

Gordon ended up missing us completely, having fizzled out after making landfall well east of the city. New Orleans is safe, for now, but hurricane season lingers on through November. And let’s not even talk about 2019, when the storms could strengthen.

By then, the city of New Orleans plans to open a brand-new, “state of the art” airport terminal. The $1 billion project is currently under construction across the runway from the existing hodgepodge of concourses. But building a new “world-class” terminal in this sinking city is no straightforward matter. It reveals the precariousness of the world in its current state—a world in which airports may be nearing extinction.

Taxiing beside the building site during trip after trip over the past year, I watched the structure slowly rise up out of the swamp. Its undulating glass facade snapped into place one pane at a time, and then jet bridges began extruding from it. The new airport will completely replace the existing terminal and concourses, serving as a fresh, vibrant point of entry and exit for the millions of tourists and business travelers who visit the Crescent City each year. The current airport buildings are being assessed as to their future use—but they are likely to remain vacant until they are slated for demolition.

New Orleans celebrated its 300th anniversary this year, and there is a palpable sense of pride and creative energy here. Air travel in and out of Louis Armstrong International Airport (MSY) is on the rise, up 20 percent from 2015 to 2017. The new airport gleams across the runway, promising to welcome this burgeoning population of jet travelers in the Gulf South. The future looks bright, from the air.

Less so from the ground. At an average of four and a half feet above sea level, MSY is the second-lowest elevation of any airport in the world, just above Amsterdam’s Schiphol. The low elevation of New Orleans, combined with easily overwhelmed pump systems and an elaborate system of levees, makes the area especially vulnerable to flooding. Meanwhile, the nearby coast is eroding at a staggering rate—roughly a football field’s worth every 100 minutes. Earlier this year, The New York Times reported that the federal government was retiring place names by the dozens for islands and bays that have “simply ceased to exist.”

Almost an island, New Orleans is particularly susceptible to coastal erosion. The grand opening of the new terminal was pushed from February 2019 to May after its gravity-based main sewer line was found to be sagging, requiring a pressurized system with lift stations to be constructed. It’s hard to depend on gravity when construction is already taking place at such a low elevation. What “ground” rests beneath is hardly firm, and it will continue to shift around and change consistency each year. Local developers even refer to the soil here as “gumbo.”

With tropical storms and hurricanes intensifying each year, a tone of bitter resignation sets in here during late summer, mixed with some gallows humor. A colleague at Tulane told me that the university had already acquired land on the north shore of Lake Pontchartrain, for rebuilding its campus when—not if—the city is finally submerged and rendered unlivable from a big storm. A Tulane official confirmed that this was pure myth, but assured me that the organization does have a robust disaster-recovery plan in place. The short distance from wild rumor to deliberate preparedness reflects a common (if often repressed) attitude here: New Orleans’s days may be numbered.

So why build a new, billion-dollar airport here? From an ecological perspective, the site is already doomed.

MSY is hardly the only American airport undergoing significant renovations right now. In Los Angeles, LAX is in the midst of a $14 billion renovation. In New York, La Guardia is getting an $8 billion upgrade, and JFK a $13 billion overhaul. Kansas City (KCI) has a new, $1.4 billion terminal in the works.

KCI’s investment might be more secure than the others; it is far away from any coast and thus not threatened by rising sea levels. But anyone who has seen a perfectly smooth travel day snarled by a storm across the country knows that when a single airport is taken out of commission, the ripple effects can be staggering. Airlines scramble to accommodate rerouted passengers, and flights get delayed when planes are grounded 3,000 miles away. Extrapolate this to entire airports suddenly rendered useless because of the unstoppable flows of a rising ocean. While it is mostly airports in coastal cities that will be affected directly by climate change in the coming decades, other sites will also be affected.

Of course, airport planning would not get off the ground if it took such apocalyptic forecasts into account. Building and renovations lumber on, pleased with short-term gains and stubborn to reckon with the realities of life on a changing planet. But New Orleans has felt the pain of disaster, and the new airport is an expression of defiance. In the face of our tenuous place and the probable reoccurrence of a major storm, we’re still going to build a new airport.

Symbolically, such a structure will communicate the dynamism of the city. And materially, it could drive future capital investments and professional relocations. The new project reflects these intertwined goals. For example, plans call for a “jazz garden” stage, set amid green space, to feature live performances by local musicians.

Will it be “world class,” as the promotional material claims? That depends on what such a structure would look like and how it would function for actual people of the 21st century. These are strange times for commercial flight, when passengers expect seamless transit but inevitably run into the complexities of global migration patterns. An actual world-class airport would have to find ways to mitigate the individuated stresses of travel while also communicating a more collective truth: Flight is no easy enterprise on an ecologically and economically stressed planet. Perhaps a world-class airport should be humble rather than flashy.

To that end, the new terminal itself is rather bland, aesthetically speaking. The concept sketches were stirring, rendered as they were from a drone-like perspective against an inky, evening sky. The real structure, now nearing completion, looks a little less captivating. It has none of the breathtaking peaks of Denver International Airport, none of the swooping concrete wings of Eero Saarinen’s Dulles terminal or his TWA terminal at JFK. Instead of being architecturally noteworthy, it’s just fine instead.

We are far from mid-century airports like Saarinen’s, or even their successors, such as Dallas Fort Worth, which promised cutting-edge convenience—drive right up to your departure gate—alongside the thrills of jet flight. Now it’s just a matter of minimizing the hassle while making the experience seem somewhat planned and dignified.

César Pelli, the Argentine-American architect whose firm spearheaded the new MSY design, is known for having “no personal signature style.” And yet New Orleans is renowned for its architecture—shotgun homes, Creole cottages, the galleries and balconies of the French Quarter, and so on. It seems like a missed opportunity, to have made a shiny new airport that could really be anywhere instead of a terminal that feels like New Orleans—from the outside as well as the inside.

That problem continues inside. An Emeril-branded eatery and a Sazerac bar will peddle local fare, offerings that smack of watered-down localism. But at least it’s a genuine attempt to make a bland non-place somewhat specific. MSY’s communications director, Erin Burns, told me that the new airport will host a retail mix including “local brands that are representative of Louisiana and New Orleans.” The airport will attempt to represent its locality within the context of generic comfort. It’s a recipe to make all types of travelers happy.

The rental-car facility—completed only a few years ago, at a cost of $72 million—is located next to the existing airport, and will now be accessible only by remote shuttle. This adds an extra leg to the air journey, an inconvenience for everyone. Then the new terminal brags about “a single, consolidated checkpoint.” The idea of consolidation sounds appealing, and indeed free movement across the concourses, after security, is a smart feature. But regular travelers will also know that when an airport has a single security checkpoint, the risks of backups, delays, and long lines also increase.

All of this is proof that today’s “world class” airport cannot rely on architectural spectacle or experiential novelty. Function is more important—but not as the Bauhaus would have had it, with elegant minimalism of form following suit. Instead, functionalism has become no-frills, done on the cheap, good enough to get the job done—for the time being. It’s world-class in the most blasé, accommodating sense of the term: Inside, keep passengers satisfied but moving. Outside, offer structure without fanfare, meeting a civic and economic need for a landscape on the brink.

The new MSY is not attempting to be “America’s friendliest airport,” as the promotional material for Phoenix Sky Harbor’s current near-billion-dollar renovation advertises. Nor does it aspire to the integrated smart tech, posh lounges, or immersive regionalisms of the new airports of Dubai, Singapore, and Seoul. Yet neither is the airport responding directly to the threats of climate change, as European airports are being advised through climate-science research. Here, the newness seems muted.

It’s as if the whole project recognizes that it is temporary, a quiet nod to the fragile world the airport services—even as it gestures toward an imagined world of ever-increasing flights and booming economic potential. If it gets flooded or destroyed in the coming years or decades, the new MSY will shimmer modestly in the catastrophe but impose relatively modest economic toll, and no great cultural loss. This is an airport for the end of the world.

The old airport terminal is still functioning, but it is slated for abandonment and eventual demolition. During a recent trip, I stared across the runway toward the new site, toward the future, where I am promised better, smoother, and more gainful transit. But then I also know that next summer will bring another hurricane season. As readily as people will begin to use the new terminal to fly in and out of this unique city, the airport could also be as quickly abandoned.

In 1947, a year after the New Orleans airport first opened, it was flooded by the final landfall of the tenacious Fort Lauderdale hurricane. It is uncomfortable but necessary to think about what the new terminal will encounter during its early years of operation, in these times of widespread denial of the human factor in accelerating planetary changes.

Airport construction under the shadow of climate change betrays the bullheadedness that typifies our time. Many environmental scientists and philosophers are calling this era “the Anthropocene,” and others debate the scientific value of this term, or propose different labels such as “the capitalocene”—an age marked first by money, the ultimate lure for human repercussions.