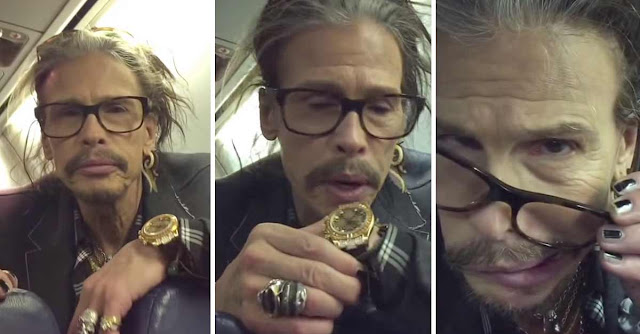 The Aerosmith member made sure that it was going to be the seven-year-old girl’s best birthday as he sang a sweet “Happy Birthday” to her during a Southwest Airlines flight.

The little girl named Carly was surprised when she learned that the legendary Steven Tyler was sitting in front of her on the plane.

Perhaps it was just meant to be since Carly just turned seven at the time. Seeing it as a great opportunity, Carly’s mother did not hesitate and asked Tyler if he could wish her daughter a happy birthday.

Tyler happily agreed, and it was a good thing the mother recorded the special moment for everyone to see.

TODAY IS A DAY THAT WILL GO DOWN IN HISTORY BECAUSE IT WAS A DAY THAT WE CHANGED IT!!! THANK YOU @DINALAPOLT AND #WEARESONA…YOU ARE THE REAL HERO TO MANY PEOPLE AND US INCLUDED. THANK YOU FOR BEING THE DRIVING FORCE BEHIND THIS MONUMENTAL ACHIEVEMENT. THE ENTIRE FUTURE OF MUSIC IS A MUCH MORE HONEST AND FAIR PLACE TO BE AND TO CREATE IN. YOU HAVE BROUGHT ABOUT CHANGE THAT WILL BRING MORE HONESTY AND BRIGHTNESS INTO OUR WORLD. THE MMA WILL HELP US CHANGE THE LIVES OF MANY MUSICIANS AND THEIR FAMILIES…MANY WHO ARE NOT AS FORTUNATE AS WE ARE…AS THEY WILL NOW BEGIN TO RECEIVE THE FUNDS THEY DESERVE FOR THE HARD WORK THEY HAVE CREATED AND WE ALL HAVE ENJOYED. CONGRATS TO EVERYONE!!! 🙌🏼💕🙌🏼🎤🎶 @WEARESONALA #MUSICMODERNIZATIONACT MUCH LOVE AND RESPECT STEVEN TYLER & JOE PERRY
A post shared by Steven Tyler (@iamstevent) on Oct 11, 2018 at 11:38pm PDT


While it was shocking to know that Tyler does not travel via private jets, it was even more surprising that he went the extra mile to make little Carly feel special.


On the mother, Christa’s YouTube account, she wrote, “Steven Tyler sits in front of us on Southwest and took my phone to sing Happy Birthday to my daughter on her 7th birthday and this is what happened…what a great guy!!! So cool and now she is also a fan for life!!”

In the video, the mother was holding up her phone when Tyler asked if he was recording. Just then, Tyler started singing a special version of the “Happy Birthday” song exclusively for the adorable girl seated behind him.

At some point, Tyler grabbed the phone from the mother’s hand and filmed the rest of the video. He showed off the birthday girl, who looked a little shy but was still coyly smiling as she was being serenaded by one of the most talented artists in the world.