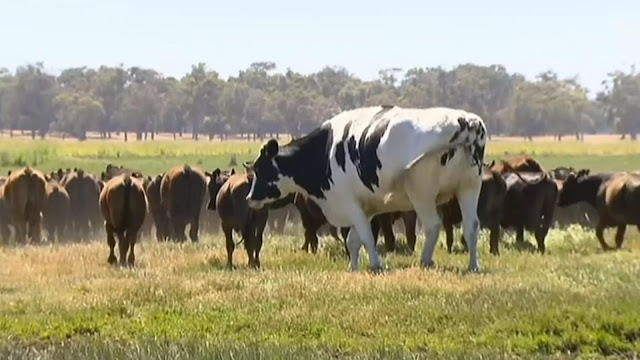 It's not every day that you see something that really makes you stop and say, "Holy cow." But that's actually the case with Knickers  'the cow', who is believed to be Australia's largest cow.

An enormous steer in Western Australia is making headlines. At 194cm 'Knickers' is the largest in his category in Australia. Story: https://t.co/ZI472MBUU4 #7News pic.twitter.com/MDEMwEbD8R
— 7 News Central Queensland (@7NewsCQ) November 27, 2018

Knickers, a Holstein Friesian steer, is a bovine behemoth that sticks out from the herd. #7News pic.twitter.com/oazuaW0SWj
— 7 News Brisbane (@7NewsBrisbane) November 27, 2018


According to 7 News Central Queensland, knickers is almost as tall as Michael Jordan, the former NBA player. Here's how they look next to each other, true to scale.

There are absolute units looking at this guy thinking “look at this absolute unit”. https://t.co/tZv8ds1oPX
— Scott Jordan Harris (@ScottFilmCritic) November 27, 2018


Geoff Pearson, Knickers' owner, said the cow's size saved him from being slaughtered.

"He was too big to go into the export plant's chain," Pearson told Australia's ABC News. "We have a high turnover of cattle, and he was lucky enough to stay behind."

Instead, he'll live out his life on the farm, where he's become a natural leader among the other cows.

"You'll put him in a paddock and all the other cattle seem to get attracted to him," Pearson said. "Whenever he wants to get up and start walking, there's a trail of hundreds of cattle following him. We all know when Knickers in on the move."