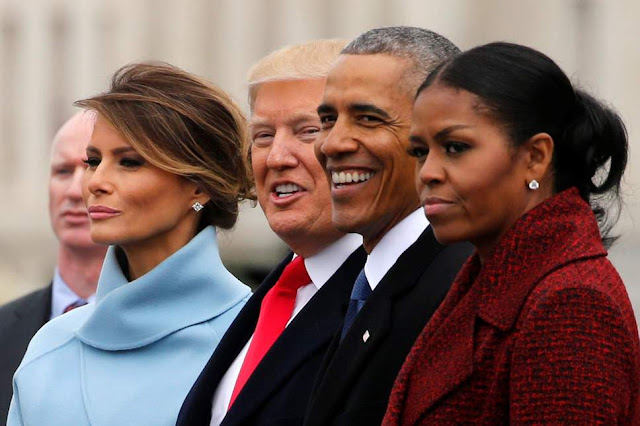 Former first lady Michelle Obama says in her new book that she stopped “even trying to smile” during President Trump’s 2017 inauguration.

Obama sat down with “Good Morning America’s” Robin Roberts in an interview released Sunday to discuss the turnover from her husband’s administration to Trump’s.

She writes in her book “Becoming” that the celebratory feel during her husband’s two inaugurations was gone when Trump was sworn into office on Jan. 20, 2017.

“Someone from Barack’s administration might have said that the optics there were bad, that what the public saw didn’t reflect the president’s reality or ideals, ” she wrote, according to ABC. “But in this case, maybe it did.”

“Realizing it, I made my own optic adjustment,” she continued. “I stopped even trying to smile.”

Roberts pointed out that the Obamas have mostly avoided criticizing Trump since leaving the White House last year.

“I think it’s safe to say that during your husband’s presidency it was ‘No Drama Obama,’” Roberts said. “What goes through your mind when you read and hear what’s going on with this administration?"

“But voters make those decisions and once the voters have spoken, we live with what we live with,” she added.


The former first lady opened up about her criticism of Trump in her book, writing that she would “never forgive” him for spreading the “birther” conspiracy theory that her husband wasn't a natural-born citizen of the U.S.

"The whole thing was crazy and mean-spirited, of course, its underlying bigotry and xenophobia hardly concealed," Obama writes. "But it was also dangerous, deliberately meant to stir up the wingnuts and kooks."

“What if someone with an unstable mind loaded a gun and drove to Washington? What if that person went looking for our girls? Donald Trump, with his loud and reckless innuendos, was putting my family’s safety at risk. And for this I’d never forgive him," she continues.