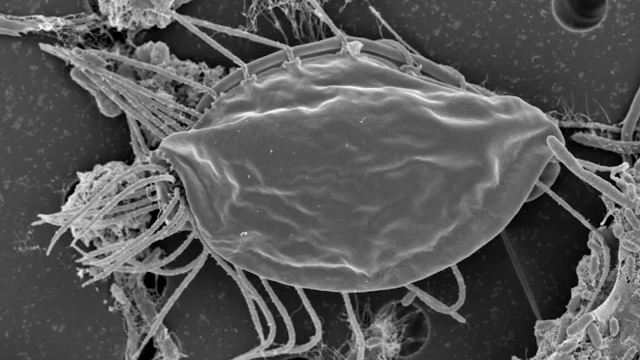 Canadian scientists have identified microscopic creatures that are so unlike anything seen before, they had to create an entirely new branch on the evolutionary tree of life to slot them in.

A new paper published this week in Nature offers the first genetic analysis of hemimastigotes—a rare and poorly understood group of single-celled microorganisms. Biologists have known about these wee beasties for well over a century, but only now can hemimastigotes be officially slotted into the evolutionary tree of life, a process more formally known as phylogeny. And by doing so, scientists have stumbled upon a completely new branch on the tree of life—one dating back billions of years.

Yana Eglit, a doctoral student at Dalhousie University and a co-author of the new study, found two different species of hemimastigotes—one already known and one completely new to science—in soil samples collected along the Bluff Wilderness Trail in Nova Scotia, Canada. The previously known species is called Spironema and the new one was dubbed Hemimastix kukwesjijk (pronounced “ku–ga–wes–jij–k”), which means “rapacious hairy ogre” in the language of the Mi’kmaq First Nations people of Nova Scotia.

Rapacious and hairy, indeed. These single-celled, free-roaming predators feature two rows of hair-like flagella, which they use for locomotion and grasping onto prey. Hemimastix feeds by connecting its mouth—if it can be called that—to the surface of its equally microscopic prey, sucking up the victim’s cytoplasm, according to observations made by Eglit and her colleagues.

A sampling of the hemimastigotes analyzed in the new study.

Hemimastigotes cannot be classified as animal, plant, fungus, or bacteria. But they’re eukaryotes, having complex cells and a clearly defined nucleus. Eukaryotes that can’t be slotted into these conventional groupings are called protists—a kind of grab-bag grouping of sometimes unclassifiable eukaryotes. Such as hemimastigotes. Aside from describing them as eukaryotic protists, scientists haven’t been able to place them anywhere within the phylogenetic tree of life. Part of the problem was that scientists weren’t able to perform meaningful genetic tests on hemimastigotes—but this has now changed, thanks to the new research.

“This discovery literally redraws our branch of the ‘Tree of Life’ at one of its deepest points,” explained Alastair Simpson, the lead author of the study and biology professor at Dalhousie, in a statement. “It opens a new door to understanding the evolution of complex cells—and their ancient origins—back well before animals and plants emerged on Earth.”

Using a new technique called single-cell transcriptonomics, and with the help of PhD candidate Gordon Lax, the Dalhousie team was able to tease large amounts of genetic material from the two species of hemimastigotes. The entire genomes could not be extracted, but enough information was gleaned for the researchers to perform a phylogenetic analysis.

To group these kingdom-level eukaryotes even further, scientists created one “supra-group,” called Diaphoretickes, that lumped four similar super-groups together (see diagram below). The purpose of this organizational scheme is to sort and cluster species according to their relation to common ancestors, rather than by their physical characteristics or other attributes. 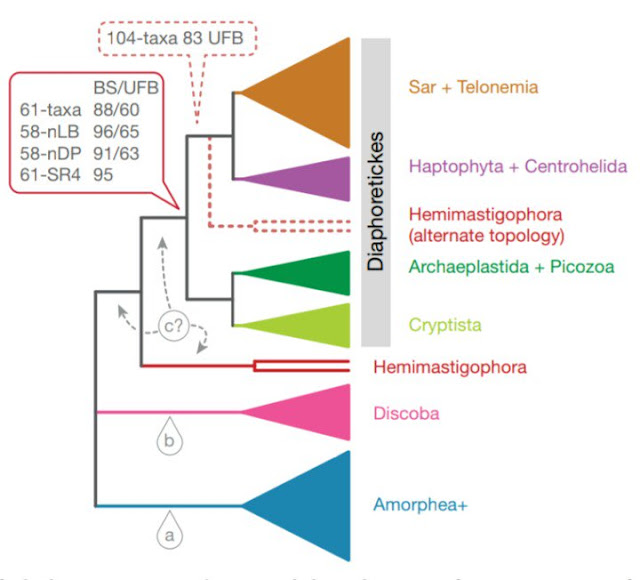 Previously, scientists had designated Hemimastigophora at the level of phylum (below kingdom), but the new study suggests they belong to a distinct supra-group, or a “novel supra-kingdom-level lineage of eukaryotes,” in the words of the researchers.

“It was clear from our analyses that hemimastigotes didn’t belong to any known kingdom-level group, or even to a known ‘super-group’ of several kingdoms together, like the one that includes both animals and fungi,” said Simpson. “This one little collection of organisms is a whole new group at that level, all on its own. It’s a branch of the Tree of Life that has been separate for a very long time, perhaps more than a billion years, and we had no information on it whatsoever.”

In addition to being the first to perform a genetic analysis of hemimastigotes, the Dalhousie team is also the first to culture these organisms. Armed with a steady supply of hemimastigotes to experiment upon, the researchers are now hoping to glean more genetic information from these remarkable creatures.

Andreas Hejnol, group leader of the Sars International Centre for Marine Molecular Biology at the University of Bergen, said the paper is valuable in that it provides a phylogenetic analysis that finally places these organisms in the tree of life.

“The methods are standard and the major accomplishment is the finding of the organisms in amounts that are sufficient to isolate the molecules and get their sequence information,” Hejnol, who was not affiliated with the new study, told Gizmodo. “Another great advance is that the researchers are in fact able to culture them.”

Praise aside, Hejnol said it’s important to remember that categories such as “supra-kingdom” and “super-group” are simply “anthropogenic categories” that scientists use to classify and organize organisms—meaning, they’re a human construct subject to change as our understanding of biology changes.

“Criteria are not well defined and are mainly based on ‘distinctiveness’ from other organisms,” he said. “This distinctiveness is mostly based on randomly selected criteria. Prior to this, evolutionary biologists normally used similarity as a criterion to assign organisms together.”

In the case of the new study, the phylogenetic analysis placed hemimastigotes on a major new branch—one that now sits alongside a pre-existing sister branch of eukaryotes known as Diaphoretickes.

“While this position is interesting and helpful for reconstructing the evolution... of these organisms, the exclusion of the hemimastigotes is arbitrary,” Hejnol told Gizmodo. “They [hemimastigotes] could also be included [in the Diaphoretickes group]—this lies in the eye of the beholder. This shows again, how arbitrary assignments such as ‘supra-kingdom’ are.”

To which he added: “The ‘novel supra-kingdom’ sounds fancy and exciting—but is of no scientific value. Pity that it obscures the main accomplishment of the authors that they are able to place this group in the tree of life—which is truly a scientific advance.”

Moving forward, it’ll be interesting to see if other scientists agree with this classification. As noted, there are other species of hemimastigotes; perhaps further phylogenetic research will affirm the creation of this new supra-group, or it could inflame this debate even further. If anything, this discovery shows the need for improved ways of describing and classifying organisms along the highest branches on the tree of life.