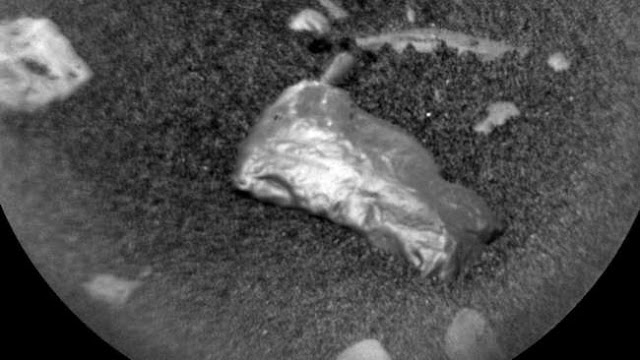 NASA’s InSight probe has only been on Mars for a week or so, but it’s already providing some dazzling images of Elysium Planitia, a flat plain near the Martian equator.

Never one to be shown up by the new kid on the block, a fascinating new image has been produced by Curiosity, NASA’s veteran Mars rover that’s been on the Red Planet since 2012. In the image, taken on November 26, we see an unusually shiny object laying on the typically red and dusty Martian ground.

Could it be aliens? Nope, sorry, it’s almost certainly not any sign of extra-terrestrial life. To figure out the true nature of this strange rock, researchers on the project say that Curiosity will attempt to analyze a sample of the object, called "Little Colonsay", for further analysis.

“The planning team thinks it might be a meteorite because it is so shiny. But looks can deceive,” NASA's Jet Propulsion Laboratory said in a statement. “Chemical analysis is required to confirm its nature.”

Curiosity has a particularly interesting way to carry out its chemical analysis. Using its ChemCam instrument, it fires a laser at the material and checks out the resulting vaporized material to see what it's made of. It used this technique on a sample discovered in November 2016 and discovered that it had a nickel-iron composition.

Curiosity has documented a small number of suspected meteorites on the Martian surface. Earlier this year, NASA’s Mars Reconnaissance Orbiter took a truly stunning image of a colossal meteorite impact on Mars. Of course, the Red Planet is no stranger to meteorites. Mars’ atmospheric pressure, on average, is about 1 percent of Earth's. It’s therefore easier for meteorites to reach the ground intact.

The nature of these meteorites seems to be a little different from the ones back home too. Only 4.4 percent of meteorites found on Earth are iron, while most meteorites are rocky. On Mars, however, iron meteorites dominate the small number of meteorites that have been found. It's not exactly clear why, but it could be to do with iron meteorites being more resistant to the harsh erosion processes on Mars.