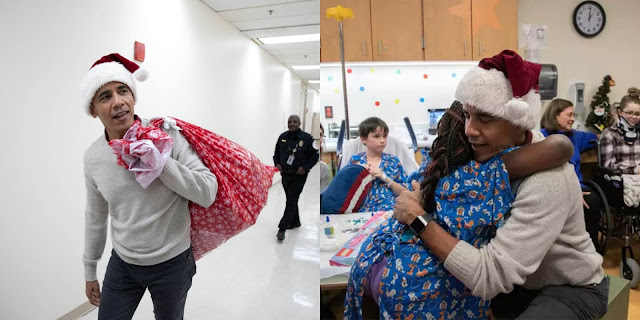 A Santa hat-clad Barack Obama made spending the holidays in the hospital a little cheerier on Wednesday when he surprised young patients and staff at Children’s National hospital.

The former president, whose love of interacting with kids was pretty obvious throughout his time in office, brought jigsaw puzzles, toy car sets, remote-control cars, glittery nail polish and other gifts to the Washington, D.C., hospital

Thank you @BarackObama for making our patients’ day so much brighter. Your surprise warmed our hallways and put smiles on everyone’s faces! Our patients loved your company…and your gifts! https://t.co/bswxSrA4sQ ❤️ #HolidaysAtChildrens #ObamaAndKids pic.twitter.com/qii53UbSRS
— Children's National 🏥 (@childrenshealth) December 19, 2018


“As a dad of two girls, I can only imagine in that situation ― to have nurses and staff and doctors and people who are caring for them and looking after them and listening to them and just there for them and holding their hand ― that’s the most important thing there is,” Obama told the crowd of hospital staff assembled around the nurses’ station. “What a great reminder of what the holiday spirit is supposed to be all about.”

He later tweeted out his gratitude to hospital staff, patients and visitors for humoring him as their “stand-in Santa.”

Merry Christmas and happy holidays to the extraordinary kids, families, and staff at Children’s National. And thanks for humoring me as your stand-in Santa. https://t.co/mFmYCVk7cr
— Barack Obama (@BarackObama) December 19, 2018