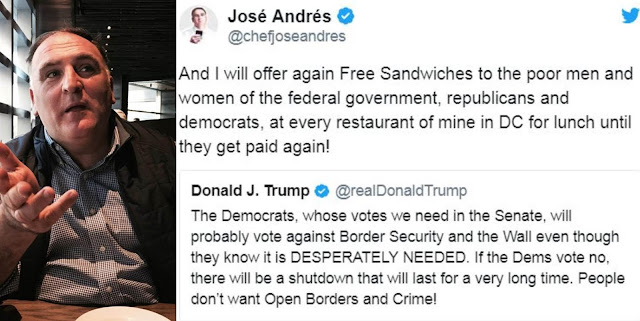 "And I will offer again Free Sandwiches to the poor men and women of the federal government, republicans and democrats (sic), at every restaurant of mine in DC for lunch until they get paid again!" he tweeted in response to a tweet from President Donald Trump about the shutdown.

And I will offer again Free Sandwiches to the poor men and women of the federal government, republicans and democrats, at every restaurant of mine in DC for lunch until they get paid again! https://t.co/hHUnPrqhsF
— José Andrés (@chefjoseandres) December 21, 2018

Congress and the president are closing in on a deadline to fund nine government agencies prior to the holidays. House lawmakers adjourned on Friday night without a spending deal, making a partial shutdown virtually inevitable.

Some 800,000 federal government workers will go without pay as long as the government remains closed.

The roadblock is roughly $5.7 billion in funding for a border wall. After initially signaling that he would sign a stopgap bill without funding for the wall that was passed unanimously in the Senate, Trump has said that he will not sign a bill to fund the government if it does not include funding for the border wall. The House passed a bill that funds the wall on Thursday, however, it needs 60 votes to pass in the Senate, which the bill does not have.

Trump initially said he'd own responsibility for a partial government shutdown, but now he is blaming Democrats for the shutdown - and he shared these feelings on Twitter, Friday morning.

"The Democrats, whose votes we need in the Senate, will probably vote against Border Security and the Wall even though they know it is DESPERATELY NEEDED," Trump tweeted. "If the Dems vote no, there will be a shutdown that will last for a very long time. People don't want Open Borders and Crime!"

Andrés, the Spanish-American, Michelin-starred chef, has been an outspoken critic of Trump. He is also notable for his humanitarian work (and was nominated for a 2019 Nobel Peace Prize). He started the World Central Kitchen after the 2010 earthquake devastated Haiti, to feed those impacted by disasters.

Andrés pulled out of a contract to have a restaurant in Trump's hotel in Washington, DC, after then-candidate Trump called Mexican immigrants "rapists" and drug dealers. In his Friday tweet, he suggested that Trump go to Tijuana with him to "feed good people, meet them, learn to love them and realize they are not the enemy you are claiming they are."

@realDonaldTrump why don’t you come with me to Tijuana to feed good people, meet them, learn to love them and realize they are not the enemy you are claiming they are? Walls will never keep America safe! But compassion to our neighbors will.... https://t.co/PsXghatlMI
— José Andrés (@chefjoseandres) December 21, 2018