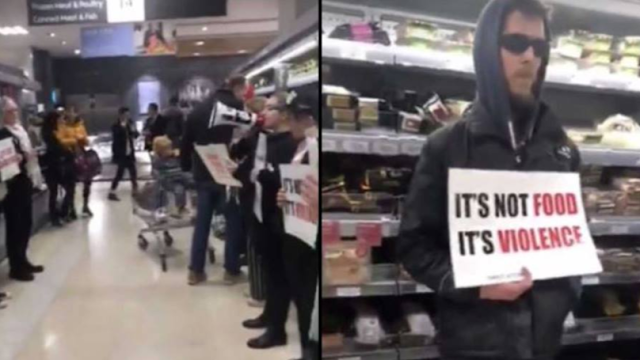 Vegan activists formed a wall around the meat aisle of a Waitrose store in a protest at the number of turkeys being slaughtered for Christmas.

The Direct Action Everywhere (DxE) group walked into the store with placards saying 'It's not food, it's violence' and 'Their bodies, not ours' while carrying flowers for the dead animals being sold there.

They stood in an impenetrable line trying to prevent shoppers from reaching packs of steak, mince, chicken, turkey and other meats at the supermarket in Brighton, East Sussex, yesterday.

A protester with a loud speaker then began a speech, saying: "This Christmas time you might be worried about what presents to buy and how to organise family get togethers, but the animals are facing carnage.

"Around ten million turkeys are slaughtered this time of year so they can end up on your Christmas table in the United Kingdom.

"Catching and transporting birds can cause considerable pain and distress. Many birds may be injured whilst being removed from sheds and put into crates. Poor handling frequently results in bruising, skin grazing and broken blood vessels.

"Loaded into trucks, piled next to their friends and not knowing where they are headed, no chance of escape. Transport to slaughter can be long with birds experiencing extremes of temperature, stress suffocation and shock." 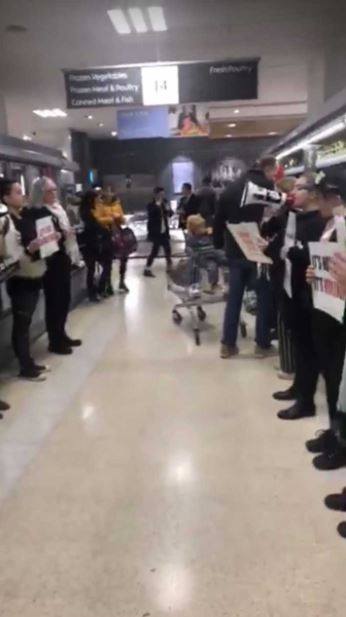 The protester then goes on to scream that birds are killed between nine and 21 weeks old when their natural life span is ten years.

Shouting, she goes on: "Animals are not things. Lives are not commodities. It's time to end these cruel and bloody traditions. Take the death off your plate this Christmas."

The store's security staff turned up not long after the commotion began.

The protesters stood still as a man attempted to access meat on a shelf behind them. Another gets into an argument, calling the protesters 'intellectually barren'.

But many shoppers simply ignore them, walk past and continue shopping. 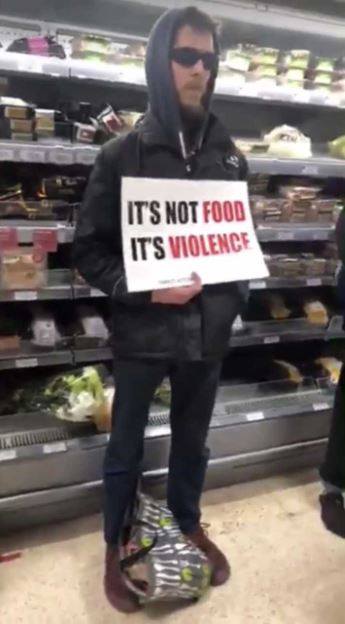 Eventually the police turn up, with an officer saying: "I am still going to ask you all to leave as you are not allowed to be in here. I will advise you that if you don't you will be liable to arrest.

"I am just being polite and respectful. You obviously have a cause you are quite passionate about but you can do it outside."

Leaving the store, the group chant in unison: "It's not food, it's violence."

They then stand outside screaming: What do we want? Animal liberation. When do we want it? Now!"

DxE is an international movement with several UK subgroups. They say their actions are done to 'denormalise activities that involve animal exploitation through non violent disruption'.

A spokesman for Waitrose said: "We pride ourselves on exceptional animal welfare, with our turkeys farmed to high standards at farms we know and trust."

He added that Waitrose was Compassion in World Farming's retailer of the year and is also in the top tier of the Business Benchmark on Farm Animal Welfare.