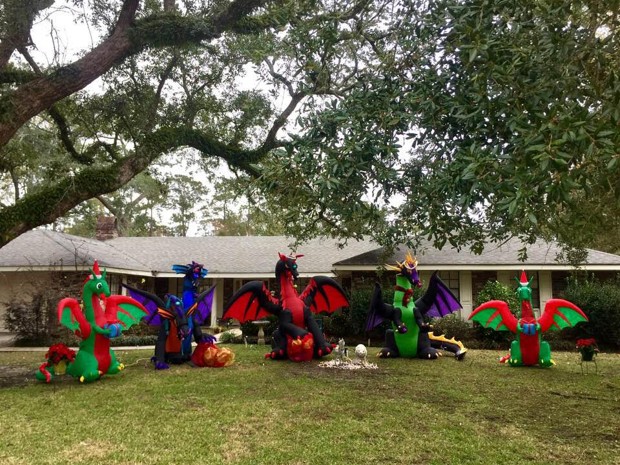 “We cannot have too many dragons,” said Diana Rowland.

Rowland is a Louisiana-based morgue-technician-turned-fantasy-writer who has celebrated the past four Halloween and Christmas holidays by artfully arranging inflatable dragons on her lawn. Her family’s collection has slowly grown: First, there was one purple and green creature sporting garlands on its neck, a Santa hat on its head, and bows covering its claws. Then it was joined by a large red and black one; together, they played Joseph and Mary. This year, Rowland added a two-headed breed to the mix. She had finally built the ultimate Dragon Nativity Scene.

It may have been an unconventional holiday display, but it was beloved by the whole neighborhood. Or so Rowland thought.

Last week, Rowland found a scathing note in her mailbox—the return address listed simply as “Neighbor”—that shattered the illusion. “Your dragon display is only marginally acceptable at Halloween,” the anonymous neighbor wrote, in all caps. “It is totally inappropriate at Christmas. It makes your neighbors wonder if you are involved in a demonic cult.” The grinch implored Rowland to consider removing the dragons. “May God bless you and help you to know the true meaning of Christmas,” the note concluded.

Rowland laughed, then posted a picture of the mail on Twitter. “[A]pparently the ‘true meaning of Christmas’ involves judgmental bullshit?”

Despite the real point of holiday decorations—increasing general neighborhood seasonal spirit—sometimes they do end up inspiring, well, judgmental bullshit. Psychologists say people who decorate for Christmas early are actually happier, because of their proximity to bright lights, and their access to nostalgia; and research shows that people who decorate their houses at all are perceived by neighbors—and even strangers—as friendlier, more accessible, and more “cohesive” than those who don’t. There’s even a reality TV show dedicated to “homeowners that have taken their love of seasonal decorating to the extreme,” with a $50,000 grand prize.

But when decorations get actually “extreme,” reactions differ. One Fountain Valley, California house covered in blinking LEDs was called “too bright” and “too loud” by neighbors one Christmas, some of whom called city council to complain. Their response seemed especially callous given that the display was actually a tribute to the homeowner’s late husband, Larry; his face was illuminated in technicolor on the roof. A less heartwarming example: The guy in Ross Township, Pennsylvania, who decorated his house with a beheaded choir and a urinating Santa Clause. A neighbor called him “very unstable” on ABC News.

Rowland said her goal with the dragons was not terror, but joy. (The sense of humor is inherited: As a kid, her dad put up a Santa being dragged by an alligator. “It was adorable,” she recalled.) The rest of the houses in her Louisiana gated community have a range of displays: One house has about a dozen inflatables, including a pink hippo and a reindeer flying a helicopter. Others have “amazing light displays that must have cost thousands of dollars,” she said. A few just go for wreaths, if anything.

“You do displays not just for yourself, but for other people to enjoy,” she said. “God knows this has been a hell of a year for everyone.”

So Rowland certainly wasn’t cowed by the anonymous suggestion from “Judgy-McJudgyface,” as she described the neighbor. “I guess they think I need MORE dragons??” she wrote on Twitter, as her original post continued to go viral. So, she got more dragons. These ones are green and red, and they hold small present boxes. Now, five dragons—and six heads—adorn her lawn.

An update to yesterday's tweet re the letter I received from an anonymous, judgy-mcjudgyface neighbor who disapproved of my dragon display and asked me to consider removing them: I have added more dragons. pic.twitter.com/OxsFQs5yQ1
— Diana Rowland (@dianarowland) December 16, 2018


The second tweet, with a picture of the updated dragon flock, went even more viral than the first: Even known dragon-lover J.K. Rowling liked it. (Rowland shrieked when she saw the notification.) People tried to donate money to get her to buy EVEN MORE DRAGONS, but she encouraged them to donate to a charity of their choice, instead of to building a Dragon Army.