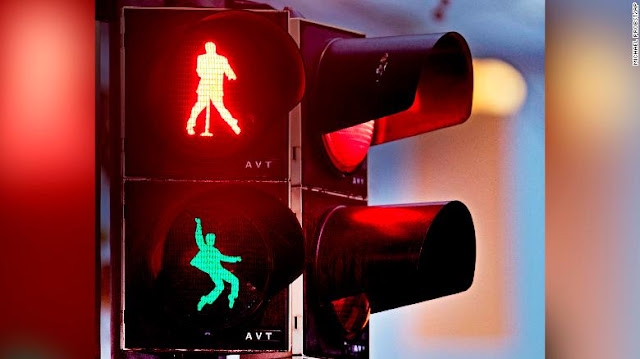 Elvis has left the building -- and headed onto the streets of Germany.

Traffic lights featuring the King's likeness have been installed in the German town of Friedberg, just north of Frankfurt, Deutsche Welle reported.

A red image of Presley standing at a microphone tells residents and tourists to keep their blue suede shoes parked firmly on the sidewalk, while a green silhouette of the singer showing off his signature gyrating moves lets people know that it's time to rock 'n' roll.

The idea was to create an eye-catching feature for visitors to the town, local politician Marion Götz told regional newspaper Wetterauer Zeitung. Götz said the initiative cost around €900 ($1,020).
Presley was stationed in Friedberg while serving in the US Army, between 1958 and 1960.

And the town can't help falling in love with the music legend -- it already has a square named after him.

The nearby town of Bad Nauheim has also held an annual Elvis Presley Film Festival since 2002.