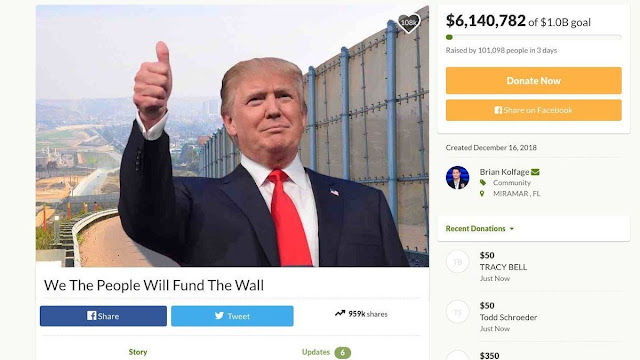 Now that President Donald Trump’s dreams of $5 billion in border-wall funding seem to be toast, some private citizens are trying a most-American solution to get the money to make it happen: crowdfunding.

The White House signaled Tuesday that it probably wouldn’t shut down the government over border-wall funding, which Trump has repeatedly threatened. Frustrated by the government’s inaction, people are throwing money at perfect strangers in hopes that they can privately muster up the billions of dollars needed to build the wall.

One such fund-raiser, a self-described “triple amputee veteran,” has raised $13 million on GoFundMe in just four days to fund Trump’s border wall. That’s impressive, but it’s only about 0.017 percent of the estimated $22 billion that Trump’s border wall will actually cost, according to a leaked report from the Department of Homeland Security.

“Democrats are going to stall this project by every means possible and play political games to ensure President Trump doesn’t get his victory,” wrote Brian Kolfage on his crowdfunding page. “They'd rather see President Trump fail than see America succeed. However, if we can fund a large portion of this wall, it will jumpstart things and will be less money Trump has to secure from our politicians.”

Another wall supporter, Quentin Kramer, has a decidedly less ambitious plan, to build part of the wall, but he’s still managed to get about $164,000 in funding.

“We need a wall in parts of places and not necessarily an entire wall,” he told VICE News.

He’s also selling “Fund The Wall” merch: coffee mugs, shirts, and water bottles that people can buy to support a wall that Congress -- and most Ameeicans -- have rejected. Kramer said he was inspired to start the campaign due to his fury over the opioid crisis, which he blamed on drug smuggling from south of the border. (Experts have long said that the opioid crisis has origins in the U.S. healthcare system, which overprescribed drugs to working-class Americans.)

Kramer hopes to act as a coalition with other border wall crowdfunders. He conceded, though, that they may not make it to $22 billion. If that happens, he said he will donate his funds raised to a charitable cause or sheriff’s association.

If he puts his money together with Kolfage’s, they’re just $216.1 million away from 1 percent of the total money needed for the wall.