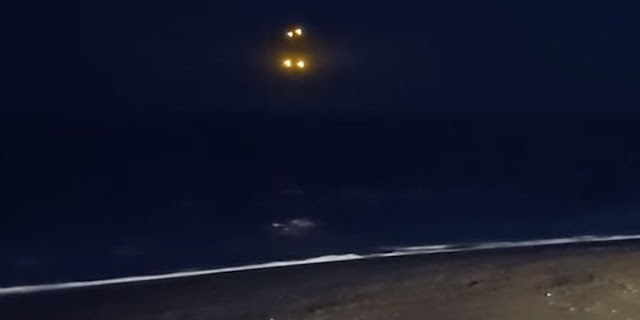 A 90-second video credited to an Outer Banks night fisherman is raising questions on social media about a possible UFO sighting off the North Carolina coast.

The recording was posted Nov. 29 on YouTube by ViralHog, which said it was made in mid November at Cape Lookout, the southernmost point of the Core Banks. It has been viewed nearly 45,000 times.

National Park Service officials at Cape Lookout National Seashore told the Charlotte Observer they were not sure what the set of lights might be, but found them to be “peculiar.”

The name of the angler who took the video is not provided by ViralHog, a video licensing agency. However, someone named C.R. Larkin posted the same video Nov. 24, writing that it was filmed Nov. 13 off Cape Lookout, between 9 and 10 p.m.

“Around 9 p.m., I rebaited my hooks, cast them out into the surf and walked back to my chair,” says a post with the YouTube video. “When I turned back to the ocean, I saw a light in the sky. The light is very bright, stationary and silent. Over the course of the next hour it faded in and out, as well as sometimes becoming multiple lights.”

The lights vanished at one point for nearly 20 minutes, says the post, “and then reappeared much closer to my position.”

It’s not the first time someone has reported seeing a UFO off Cape Hatteras, including a 2011 incident in which someone anchored off shore said they saw a rectangle of “three vertical red lights moving together over ocean,” according to UFO-Hunters.com.

Commenters on the video suggested it could be anything from distress flares to “spy drones from another country.”

“It’s either someone in distress or a military exercise,” said Ashley Elizabeth.

“These lights do not appear like flares,” wrote Paul McNaney on YouTube. “They both consist of two connected lights, sort of like headlights. Flares don’t look like that. Also, to me, it appears as though they’re not losing altitude, or moving, at all.”

One commenter, Robby Patrisio, appeared to make a valid point that the object does qualify as an Unidentified Flying Object.

“It’s a flying object and you can’t identify what it is. Hence, UFO,” he posted on YouTube.