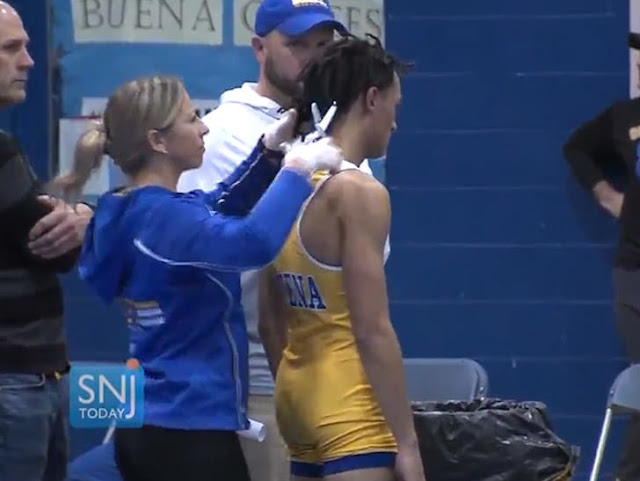 A black high school wrestler was told by a white referee that he needed to cut off his dreadlocks or forfeit an important match ... and the whole incident was captured on video.

Andrew Johnson was about to compete for Buena Regional High School in New Jersey -- and was wearing a cover over his dreadlocks ... when referee Alan Maloney stepped in.

Maloney told Johnson his hair cover was not sufficient and gave him 2 choices -- chop off the locks or lose the match.

Johnson reluctantly chose the haircut -- but you can see he's visibly upset.

Epitome of a team player ⬇️

A referee wouldn't allow Andrew Johnson of Buena @brhschiefs to wrestle with a cover over his dreadlocks. It was either an impromptu haircut, or a forfeit. Johnson chose the haircut, then won by sudden victory in OT to help spark Buena to a win. pic.twitter.com/f6JidKNKoI
— Mike Frankel (@MikeFrankelSNJ) December 20, 2018

Johnson destroyed his opponent -- but he's clearly devastated about the hair cut ... even when the ref raises his hand in victory.

His teammates tried to console him but Johnson wasn't really having it.

Now, it's been revealed the ref has a history of racist behavior -- using a racial slur toward a black man during a social gathering in 2016 ... and getting his ass kicked in the process.

The offended party (an African American man) was so pissed, he slammed Maloney to the ground following the slur.

Maloney later apologized for the incident and the body that oversees high school wrestling in New Jersey ordered him to complete a sensitivity training class.

We've reached out to officials at the NJSIAA -- which oversees high school athletics in Jersey -- so far, no word back.