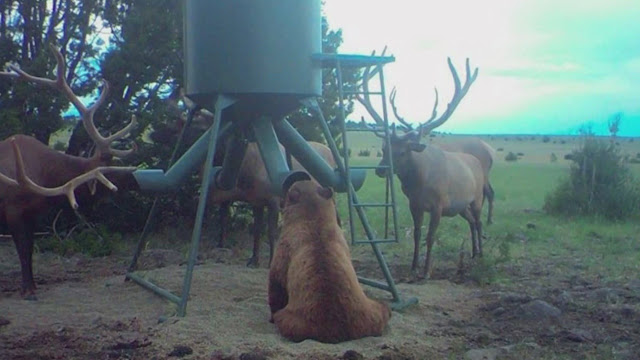 A rare sight caught on camera in Cimmaron is getting a lot of attention on social media.  A photo of a bear surrounded by elk has been viewed and shared thousands of times since it was posted on Monday.

"It's definitely an abnormal moment, especially a bear of this size...it's got to be a 400-pound bear sitting there," said John Caid, General Manager, Express UU Bar Ranch.

A photo of a bear surrounded by elk is getting shared a lot since being posted on Monday.

The picture was taken at the Express UU Bar Ranch in Cimarron.

The180,000 acre ranch has 22 cameras throughout the property. Through the years they've captured bugling elk, running antelope, newborn fawns and majestic owls

Caid says in this picture the bear seems to be satisfied with the protein from the feeder.

"Normally the elk would be intimidated and the bear would push them off and they wouldn't even come around," Caid said.

This isn't the only unique moment his cameras have captured. One picture shows a bear climbing the ladder up to the feeder, and another with six bears sitting around the feeder

"Bears are so adaptable...very interesting how they can adapt to a situation," Caid said. "The bears really dominate these areas."

Even though the bears pop up from time to time, "I think I get more confused the more I see these bears," Caid said.

The picture was actually taken in July 2016, but the ranch just posted it this week.