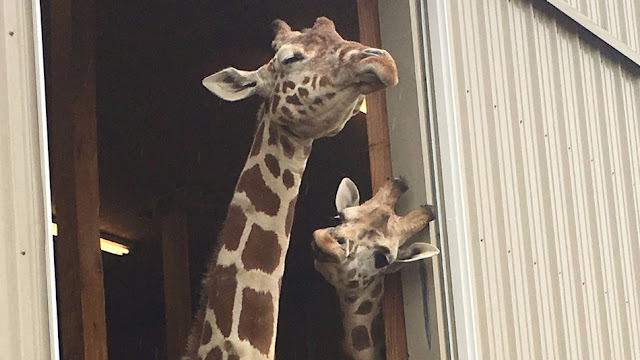 Having tasted the viral birth highs of 2017, it was only a matter of time before April the giraffe came back to YouTube for another sweet hit of the good stuff.

That's right, everyone's favorite cam star is back at it again. According to the Animal Adventure Park in Harpursville, New York, April gave birth to a healthy male calf at 12:43 p.m. ET on March 16.

"Approximately 11:00 am, Jordan entered the barn to check April, who laid with her back end just out of camera view on both camera angles," reads the post. "Upon Jordan’s entry to the barn, April stood up and revealed that she had in fact been in labor and the calf’s hooves and first 8-10” of leg were emerging!"

At the time of this writing, a livestream of April and her newborn has over 40,000 viewers. Undoubtedly, many of those watching from home are taking a short break from debating whether or not to bring children of their own into a world on the brink of crisis.

Animal Adventure Park notes that over 300,000 people watched live as April gave birth this time around.

In 2017, April gave birth to a boy named Tajiri. At this time, it is unclear if the new calf has been given a name.

While April's new calf didn't quite rise to the level of cultural phenomenon that her baby calf did in 2017, the arrival of a newborn tall horse is happy news for both Animal Adventure Park and for giraffe-lovers everywhere.

Welcome to the world little one!
Approximately 12:43 pm, our calf made its big “splash” into the world! Dr Tim quickly identified we had welcomed a baby boy!#GiraffeWatch2019 #AnimalAdventurePark #ApriltheGiraffe pic.twitter.com/PsCcFwRx6j