China to introduce new generation of driverless trains in 2020 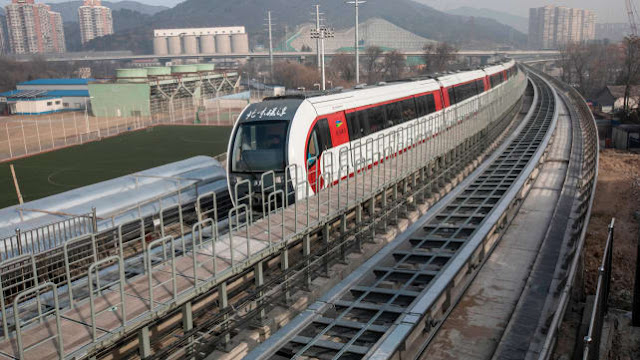 A new, faster generation of driverless magnetic levitation trains is set to debut in China as early as 2020, according to state media.

But those dreaming of eye-wateringly fast, record-breaking bullet trains will have to sit tight.

These trains are medium-low-speed maglev, though still impressively quick.

Built and developed independently in China by CRRC Zhuzhou Locomotives Co. Ltd., they will be the company's third generation of medium-low-speed maglev trains.

The newly developed maglev prototype will run at a speed of 200 kph -- 40 kph faster than the 2.0 version and double the speed of the 1.0 version.

When finished, the trains will be the fastest commercial maglevs developed and built completely by Chinese firms.

CRRC Zhuzhou is a subsidiary of China Railway Rolling Stock Corporation, one of the world's largest train manufacturers.

While the 1.0 version has been running in Changsha -- capital city of China's Hunan Province -- for two years, the 2.0 version is being assembled and tested in that city. Neither of those trains is capable of driving without a human controller, unlike the new version.

The medium-low-speed maglevs are designed to improve intercity transport infrastructure, unlike high-speed versions, which are primarily used to connect major cities. Compared to traditional trains, maglevs are safer and quieter -- lower than 70 decibels, quieter than a normal vacuum cleaner.

Faster and smarter: Maglev 3.0
China's 3.0 medium-low-speed maglev will offer increased capacity, higher acceleration speeds and improved climbing abilities. For instance, the trains will be capable of ascending heights up to four stories in just 100 meters.

The new train will also have a more "powerful brain" than its predecessors, allowing for safer autopilot operation, according to the company's chairman, Zhou Qinghe.

When tests are done, the new maglev is expected to be used for intercity transit of 50-200 kilometers in distance.

In addition to the maglev system in Changsha, Beijing added the capital city's first medium-low-speed maglev train to one of its subway lines within the city in late 2017.

While the maglev technology has been developed and touted as the future of train transportation for decades, there are only a handful of countries operating maglev trains around the world: China, South Korea and Japan.

Maglev trains use magnetic repulsion both to levitate the train up from the ground, which reduces friction, and to propel it forward.

Meanwhile, Japan has drafted plans to build a record-breaking maglev line, the Chuo Shinkansen, with a top speed of about 500 kph.

The first phase of the project, connecting Tokyo and Nagoya, is scheduled to be completed in 2027 and is expected to cut traveling time between those cities by half.