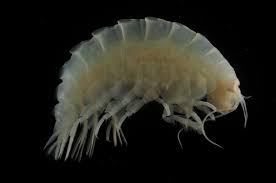 Stories of whales, turtles, and seabirds with guts filled with plastic have become increasingly common.

Recently, a team of scientists wanted to determine the extent of plastic pollution and its effects on animals by investigating the most remote regions of the ocean, sending vehicles to the deepest marine trenches to collect tiny amphipods — shrimp-like creatures — that scavenge for food in the harsh environment.

In the Mariana Trench, the deepest point of the ocean, every single amphipod captured had at least one plastic fiber in its stomach, according to the research published Wednesday in the journal Royal Society Open Science. The Mariana Trench is in the western Pacific Ocean, close to Guam.

cross six trenches that were studied, 72% of amphipods contained plastic particles. Although the plastic pieces were minuscule, the researchers told the Atlantic that relative to the creature’s size, the fibers were equivalent to a human swallowing a meter of plastic rope.

Alan Jamieson, the lead author of the report, told the Atlantic that the plastic likely harms the creatures in multiple ways. For one, plastic is indigestible and therefore takes up space in the gut. If enough plastic is in an animal’s stomach, the creature could mistakenly think it's full and starve to death as a result.

Plastic can also be a magnet for toxic chemicals such as polychlorinated biphenyls, or PCBs, that disrupt the health of animals.

Amphipods living in the deepest parts of the oceans are, by necessity, excellent scavengers. The relative scarcity of food and lack of light miles underwater make any morsel of food valuable. As a result, amphipods are uniquely vulnerable to consuming pieces of plastic.

Future research will have to be done to figure out how plastic consumption affects amphipod health.

But the impact of plastic on other animals could provide some clues. One team of researchers found that turtles become 20% more likely to die after consuming a single piece of plastic, and many beached whales have been found with guts full of plastic. Even coral reefs are adversely impacted by plastic pollution.

It’s likely that amphipods are similarly harmed by plastic and, if that’s the case, then plastic pollution poses an existential to marine food chains. These tiny creatures are a source of food for other animals and their decline could ricochet throughout ecosystems.

Each year, more than 8 million tons of plastic enter the world’s oceans and more than 5 trillion pieces of microplastic currently contaminate marine environments.

As rates of plastic production continue to climb, perhaps the decline of marine species will serve as a wake-up call for countries to protect the oceans.

“What you put in the trench stays in the trench,” Jamieson told the Atlantic. “[The plastic problem] is only going to get worse. Anything going in there isn’t coming back.”