Everyone Is Ridiculing Trump's Fast Food Buffet, But Let’s FLASHBACK To When Obama spent $65k in taxpayer money on pizza and hotdogs for private WH party 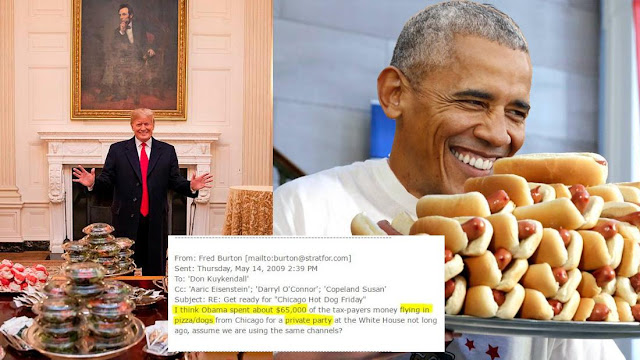 Democrats and their allies in the mainstream media have been mocking President Donald Trump for serving “fast food” to the Clemson Tigers football team.

But according to emails obtained by WikiLeaks, former President Barack Obama’s administration flew in $65,000 worth of hot dogs from Chicago – using taxpayer funds – for a private party in 2009.

On Monday, Trump hosted the Clemson Tigers football team at the White House to celebrate their national championship victory over the Alabama Crimson Tide.

Given that part of the federal government is shutdown, a vast majority of the White House staff — including those who work in the kitchen — have been furloughed.

As such, Trump used his own money to purchase an enormous amount of food from McDonalds, Wendys, and Burger King for the football team and staff.

However, when Obama did something very similar, the media never batted an eye.

2009: Obama takes fast food orders, gets in The Beast, drives to fast food restaurant, buys bags of fries & burgers, brings them back to WH & eats fast food in The Oval Office


Emails from global intelligence firm Stratfor, released by WikiLeaks in 2012, show that the Obama administration spent $65,000 of taxpayer money to fly hot dogs to a private dinner party at the White House in 2009.

“If we get the same ‘waitresses,’ I’m all for it!!!” replied Stratfor Vice President Fred Burton replied, asking if they would be “using the same channels.”

“I think Obama spent about $65,000 of the tax-payers money flying in pizza/dogs from Chicago for a private party at the White House not long ago, assume we are using the same channels?” he said.

Check out a screenshot of the email below: 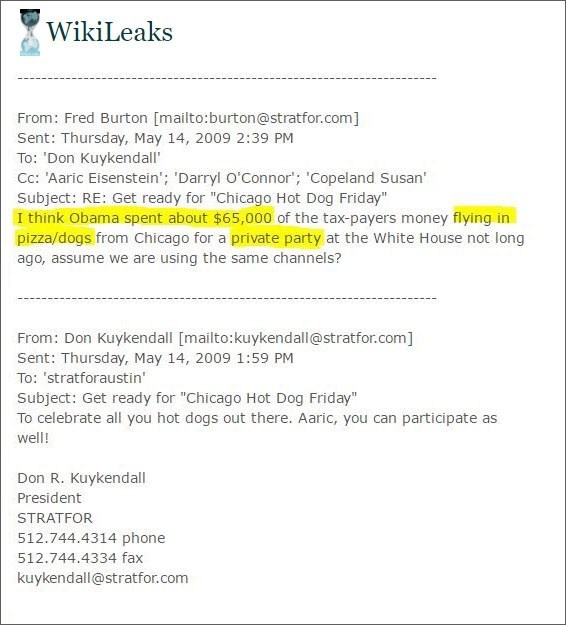 When Trump uses his own money to serve a massive meal to athletes, the media chastises and insults him.

In fact, some liberal media outlets accused Trump of being “racist” because he served fast food to teams that have black athletes.

When Obama used $65,000 of taxpayer money to fly hot dogs in from Chicago, the media could not care less.