No Comments
The world's largest bee is a big, black wasp-like insect as long as an adult's thumb, and it was extinct — or so scientists thought. The massive bee was rediscovered alive in Indonesia last month, decades after it was last seen.

Wallace's Giant Bee was named after discoverer Alfred Russell Wallace, who found the massive species. The last time a specimen was spotted was 1981. In January 2019, a group retraced Wallace's steps and journeyed to Indonesia to see if they could find the bee. Their long trek paid off. 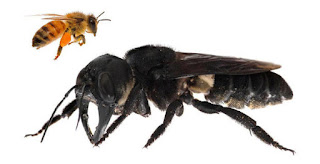 Megachile pluto is the world's largest bee, which is approximately four times larger than a European honeybee.

Natural history and conservation photographer Clay Bolt described the team's five-day search for Global Wildlife Conservation. On the last day of their expedition, everyone on the team had fallen ill, but they persisted and eventually came across what they believed to be a bee's nest. Bolt called it "the most remarkable thing I'd ever laid my eyes on."

"I simply couldn't believe it," he wrote. "We had discovered Wallace's Giant Bee." After doing a victory dance, Bolt photographed and filmed the bee. "My goal was to be the first person to make a photo of a living Wallace's Giant Bee and I had achieved that goal."


The newly rediscovered Wallace's Giant Bee, also called "Raja ofu," or king of bees, has gained widespread media attention. Live Science called it a "nightmare bee." Little is known about the insect, which has a dark body about 1.5 inches in length — four times bigger than European honeybees. 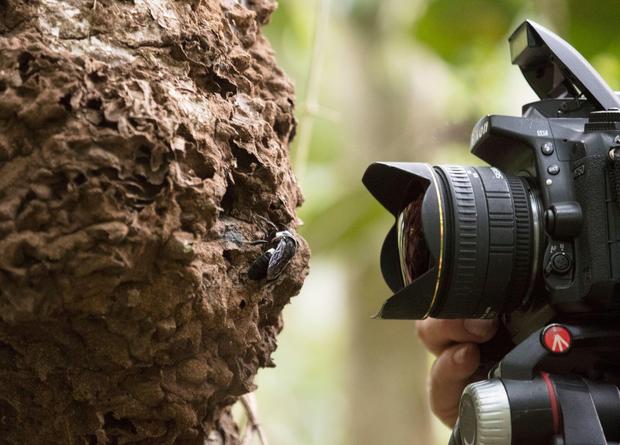 Natural history photographer Clay Bolt makes the first-ever photos of a living Wallace's Giant Bee at its nest, which is found in active termite mounds in the North Moluccas, Indonesia.

The bees build communal nests on termite dwellings, researcher Adam Messer observed in the 1980s. Messer was the last scientist to document the supersize bees in the wild, according Live Science. Until now, that is.

Bolt and one of his teammates, entomologist Eli Wyman, returned to the U.S. after making the discovery and hope to work with researchers and conservation groups in Indonesia to ensure protection for the giant bee, Bolt wrote.

While a giant bee may sound horrifying, Bolt said "just knowing that this bee's giant wings go thrumming through this ancient Indonesian forest helps me feel that, in a world of so much loss, hope and wonder still do exist."