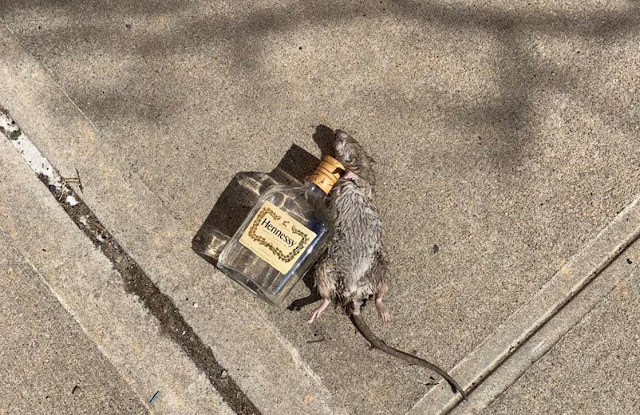 SNY news anchor Chris Williamson tweeted a bizarre photo of a passed out, or possibly dead, rat clinging to an empty bottle of Hennessy. "Just another day in New York City," the caption read. Willamson later joked that the animal "was drinking away the pain from the Knicks' 18th straight loss."

Willamson told NBC 4 he snapped the picture at around 11 a.m. on Valentine's Day in Bed-Stuy. As of Friday afternoon, the tweet had officially gone viral, garnering more than 2,000 retweets, about 6,000 likes, and a slew of headlines.

A day before Willamson's post, comedian Patton Oswalt shared a photo of what we assume was the same rat. Oswalt's image showed the rodent in between the Hennessy bottle and an empty pack of Newport cigarettes. The rat's position change led some to believe Willamson had staged the picture—a theory he has since denied.

First day shooting RATA2OUILLE! There were creative differences with @BradBirdA113 but the new script and directing by Abel Ferrara are fantastic! So excited for you guys to see this! (Photo from IG: newyorknico) pic.twitter.com/sZsBXBVQkg
— Patton Oswalt (@pattonoswalt) February 13, 2019

Lol yea pretty sure his photo came first and I just came after he created the art.
— Chris Williamson (@CWilliamson44) February 14, 2019

Despite the speculative questions, it's clear Twitter users are enjoying Henny Rat.