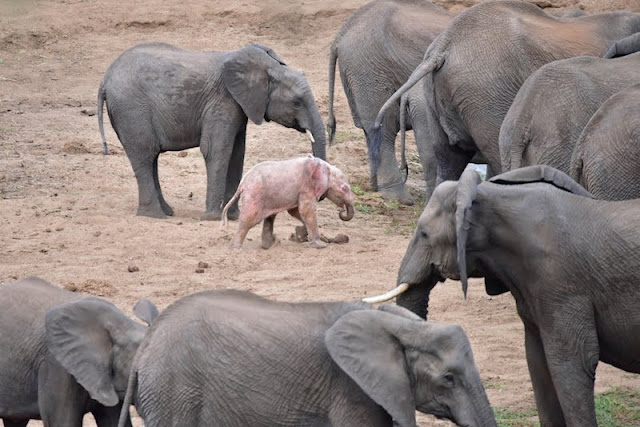 It’s not every day that you see an albino elephant, so you can imagine the shock 58-year-old Nicki Coertze experienced when he saw a little white baby elephant with pink ears.

The rare sighting took place at the Kruger National Park in South Africa. Immediately, Coertze knew this was an exceptional sighting. He has been visiting the park since he was a child and spends around 30 days a year there and still, he’d never seen anything like this before.

Coertze was on safari with his family when he spotted the unique elephant baby drinking from a watering hole alongside its mother and family. The baby’s pink-tinted skin stood out from the pack in a big way, against a sea of gray African elephants.

As much as the albino elephant stuck out to Coertze, he will stick out to predators as well. This is what puts him, and other albino wildlife, in greater danger. Not to mention, their pink eyes and skin are very sensitive to sunlight.

Animals are naturally meant to blend in with their habitats, and as cute as this albino elephant may be, he stands out like a flashing sign.

According to Dr. Ian Whyte, a specialist in large herbivores at Kruger Park, albino wildlife is more common than many people often think. Unfortunately, that’s because many don’t survive very long. 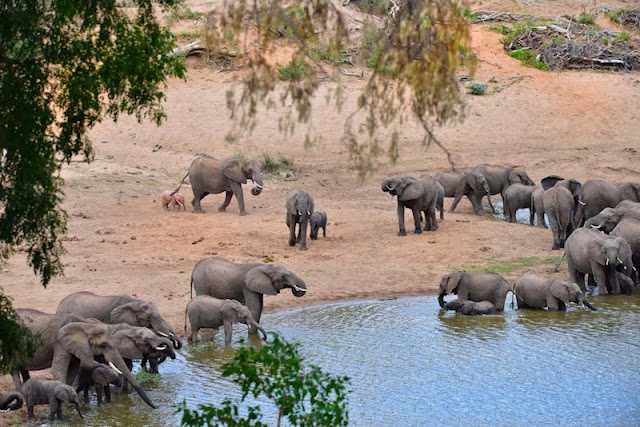 While the baby is believed to be an albino, it is still unclear if he is a true albino or a white elephant, which is also rare. That’s because none of the photos offer a clear enough image of the baby’s eyes to see if they are pink or not.

The baby’s eyes are partially closed in all of the pics, which may indicate he is a true albino and was trying to shield his sensitive eyes from the sun. Although, no one can say for certain quite yet. Albino wildlife is known to not have strong eyesight.

Coertze remained on watch, hoping the baby would take a dip in the watering hole, washing away the dirt and letting his true colors shine through even more.

In the end, the baby did not end up going in the water, and instead stayed close to his mother and family the entire time.

Coertze noted that the baby did not appear to get any special attention and was treated just like any other member of the herd.

“It is unclear whether the calf is a true albino or ‘white’ elephant, but may be what is known as a leucistic animal,” experts at Kruger National Park explain.

“A true albino has no protective skin pigment, melanin, and has unpigmented pink eyes and white skin with no markings. A leucistic animal is white, but has dark eyes, and can have some pigmentation, producing ‘ghost’ markings.”

A white elephant is rare but not considered a distinct species of elephant. They appear snow white but are actually closer to a reddish-brown color that turns pink when wet. Their eyelashes and toenails are fair in coloring as well. 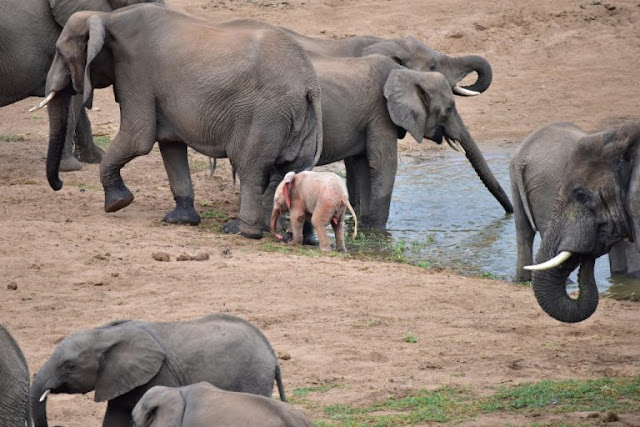 In Thailand, albino elephants are a sacred symbol of royal power. Whenever a white elephant is discovered, it is presented to the ruler and a ceremony takes place. It’s important to note that the elephant is not taken into captivity.

King Bhumibol Adulyadej has 10 albino elephants. The more a ruler collects, the greater their achievement, and 10 is considered a brag-worthy number.

In Africa, albino elephants are considered especially rare. The few who reside in this region often suffer from skin issues and blindness because they have no natural protection from the oppressive sun.

Interestingly, in America, “white elephant” is a term used to signify something that is spectacular or prestigious. Although more trouble than it’s worth to its current owner, it may be better fitted to someone else. Hence, how it became the name for a popular gift exchange game at parties – white elephant.