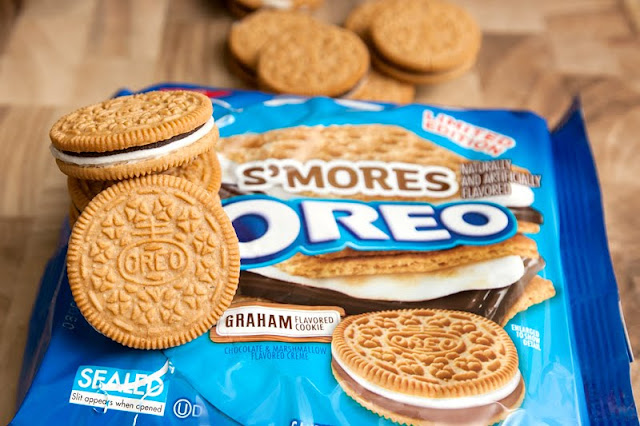 We have confirmation. As rumored to be, S'mores Oreos—or S'moreos, if you will—are officially coming back to stores this Spring. According to Insider, an Oreos rep stated that the cookies will be available come April in all places Oreos are normally sold.

God forbid you've forgotten what loveliness awaits you, we'll remind you: The soon-to-return Oreos have graham cracker-flavored cookies and two layers of cream—marshmallow and chocolate. GET EXCITED, PEOPLE.

When Oreo releases one new flavor, a slew of additional rumored flavors tend to follow, and more often than not, the junk food bloggers that announce them are correct. So we're pretty excited to tell you that per @TheJunkFoodAisle, S'mores Oreos will be returning to stores this year for the the first time since 2016.

The delicious cookies first dropped in May 2015 as a limited edition flavor. They're similar to the newer Girl Scout s'mores cookie, with graham cracker-flavored cookies on the outside and layers of marshmallow and chocolate creme on the inside.

S’mores Oreo is coming back in 2019! Last spotted in 2016, S’mores Oreo features a Graham flavored cookie and layered Marshmallow and Chocolate flavor cremes. While the cookie seems to be the same (though I will say they taste better than I remember) the packaging is getting a cool new redesign. 📸 @towndentistrybrookhaven 🍫🔥🏕 TheJunkFoodAisle.com #thejunkfoodaisle #oreo #oreos #smore #smores #smoresoreo #smoreoreo #chocolate #marshmallow #marshmallows #camping #grahamcrackers #graham #limitededition #Nabisco #mondelez
A post shared by TheJunkFoodAisle.com (@thejunkfoodaisle) on Jan 12, 2019 at 10:28am PST


The Junk Food Aisle's post shows updated packaging, and I gotta say I'm not mad about the marshmallow on a stick as an 'o' addition. These will likely appear around summertime, though Nabisco (Oreo's parent company) has yet to confirm the cookies are even officially coming back.