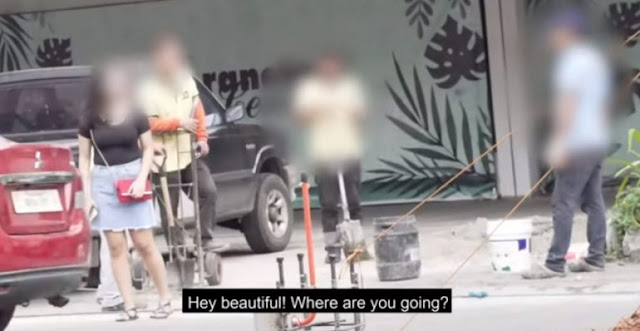 A woman in the Philippines has been widely cheered on social media for successfully sending a man to jail for catcalling.

April Grace took to Facebook to share her recent confrontation with a catcaller who kept pestering her while she was playing with her dogs in the premises of their residential area in Quezon City, Philippines.

Noting that she was wearing decent clothes during the incident, Grace shared that the unnamed man kept asking for her phone number, saying stuff like “hello, beh (bae),” and asking for her dogs’ names.

As he apparently would not take a hint from her non-response, Grace decided to tell him off. When confronted, the man allegedly denied the accusations and claimed that he was merely talking to someone on the phone. He even laughed and mocked her for her reaction.

After she filed a complaint at a local police station, the man claimed that he didn’t know about the anti-catcalling ordinance in Quezon City.

In the Philippines, Quezon City is the first local government to penalize catcalling.

Introduced by QC Councilor Lena Marie Juico in 2016, the measure officially made cursing, catcalling, repeatedly asking the subject for a date or contact information or taunting a woman with constant talk about sex to be punishable with a fine ranging from 1,000 to 5,000 Philippine Pisos ($19.32 to $96.60) or a jail term of up to one month.

The ordinance was passed as part of the Safe Cities and Safe Public Spaces Initiative of UN Women.

Stalking and making offensive mouth, hand or body gestures with the intention to demean or threaten a woman are also considered medium violations with the same range of penalties, reports Inquirer.

According to Quezon City Mayor Herbert Bautista, the law supplements “other national laws that protect the interest of women.”

Among those laws is the Anti-Sexual Harassment Act of 1995, which criminalizes unwanted sexual attention and conditional sexual favors from persons of authority in the workplace, training venues and educational institutions.

A similar ordinance was passed by the local government of Manila in 2018, banning catcalling and other forms of sexual harassment in the city, according to GMA News.

In her post, Grace went on to remind others that catcalling isn’t something trivial to just brush aside.

“Ladies, it’s time to exercise our right to feel safe on our streets and the places we go to,” she wrote in Filipino. “Even if it’s difficult and even if it makes you feel embarrassed for talking about it, if we don’t start teaching catcallers a lesson, they will never learn.”