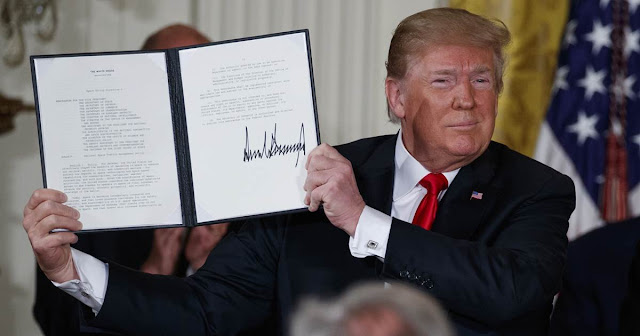 May the Space Force be with you.

President Donald Trump on Tuesday signed a directive for the Pentagon to officially create the U.S. Space Force.

The Pentagon must now draft legislation that then has to be adopted by Congress. The Space Force will reportedly fall under the Air Force.

“We have to be prepared. Our adversaries, whether we get along with them or not, they’re up in space. And they’re doing it, and we’re doing it. It’s going to be a very big part of where the defense of our nation is going to be,” he pointed out.

Trump has championed the creation of a Space Force for several months now.

The President in May 2018 had announced that his administration was “seriously thinking” of adding a sixth branch to the U.S. military called the “Space Force.” He had previously floated the idea back in March of that year.

On March 13, 2018, Trump had told an audience of service members at Marine Corps Air Station Miramar that he suggested to his administration the addition of a space force offhandedly, but ultimately took the idea more seriously given the importance of national security.

Then, in June 2018, when speaking at the National Space Council, verbally ordered the establishment of the Space Force.

Since then, the Defense Department and other officials have reportedly gone back and forth about just how much a Space Force would cost, and whether or not a Space Force would its own branch of the military or fall under an already established branch.

The Air Force has estimated that the Space Force could cost $13 billion over five years, but there were no funds designated for a Space Force in the 2019 defense budget.

Former Defense Secretary Jim Mattis had opposed the creation of a Space Force in the past, before Trump again pitched it. Mattis had in 2017 written a letter to the Senate Armed Services Committee pointing out that he would oppose the creation of what was being called the “Space Corps” at the time.

“I opposed the creation of a new military service and additional organizational layers at a time when we are focused on reducing overhead and integrating joint warfighting functions,” Mattis wrote.

Mattis had said the military is focused on lethality and eliminating overhead.

The last branch of the military added to the U.S. Armed Forces was the Air Force in 1947.