US Trophy Hunter Poses Next To Corpse Of Rare Screw-Horn Goat He Paid $110,000 To Kill

No Comments
Despite all efforts to stop trophy hunting around the world, it seems to continue.

People fly from across the globe, pay a hell of a lot of money and then proudly pose for a picture with their dying or dead animal. 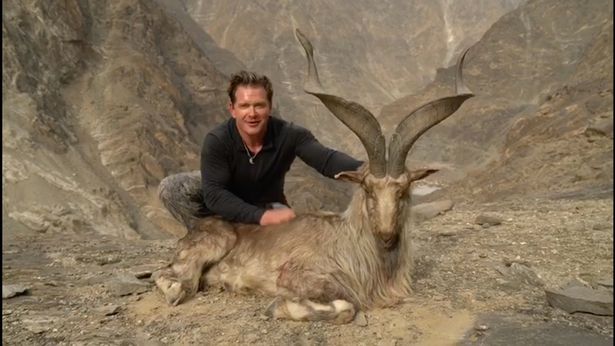 Here is a bloke who forked out a whopping $110,000 to kill a rare Himalayan screw-horn goat. Not only that, but he paid the money to the Pakistani government to get authorisation for the hunt.

Bryan Harlan is the man who paid for the hunt and told Dallas News: "It is an honor and privilege to be back in Pakistan.

"This is the third time I am in Pakistan. I have hunted almost all animals here.

"I saved the markhors for the last."

The Astore Markhor used to be listed as endangered but was downgraded to near-threatened, which still doesn't mean it's out of the woods in terms of conservation.


Strangely, despite hunting these animals being illegal in Pakistan, the government will still okay an expedition as long as they get paid for it.

According to Dallas News, 80 percent of the money goes to local communities, which is nice, but doesn't really excuse the killing of a defenseless animal for no other reason than sport.