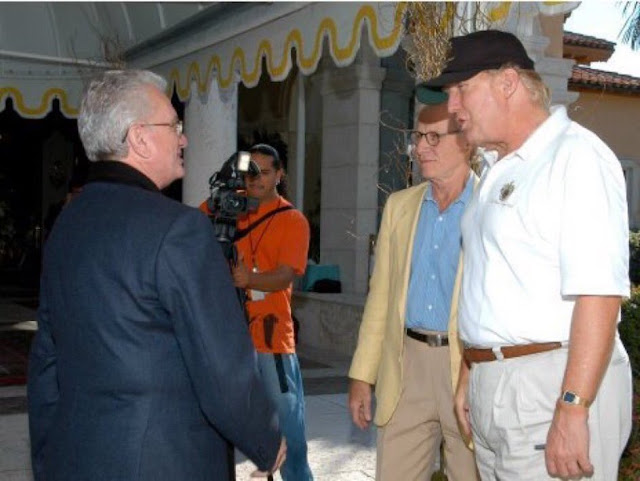 Trump’s “alleged” collusion with Russia has been a hot topic ever since this shit show started back in 2016. There’s been no shortage of “proof” and several of his former employees are now spending a nice vacation in the pokey as part of their connection to the scheme. And thanks to Trump’s Twitter, we know that he loves to get his panties in a wad when someone points out the obvious — which happens often.

And today is no different. Democratic activist Scott Dworkin took to Twitter today to deliciously taunt the Trump’s with a photo of Donald welcoming a Russian to Mar-a-Lago. But this isn’t just any old Russian. This is a photo of our president welcoming a Russian that is well-known to be close to Mr. Putin himself, Dr. Mikhail Piotrovsky, who runs Heritage Museum in Moscow.

Whatever you do today don’t retweet this photo I found of Trump welcoming a Russian, who’s close to Putin, to Mar-a-Lago over 9 years ago. It could make Trump go off the deep end. Trump hosted an event for him in Jan 2010. Dr. Mikhail Piotrovsky runs Hermitage Museum in Moscow. pic.twitter.com/NEGny4XC23
— Scott Dworkin (@funder) March 12, 2019

The photo actually dates back to January of 2010, when Trump hosted an event for the doctor. But Trump’s business with the guy isn’t even the point of Dworkin’s tweet today. It seems, instead, that he just wants to see if he and the Twitter community can make ole Donnie lose his doggone mind once again.

And really, who can blame him? It’s just too damn easy.

Dworkin is encouraging his followers to retweet the hell out of the photo. But he’s doing it in the most hilarious, provoking way possible. Saying, “Whatever you do today don’t retweet this photo… It could make Trump go off the deep end.” Because he knows just as well as I do that Trump will have himself a big old hissy fit. And we will get to sit back and witness the Twitter storm of rage that will soon follow. What better to do on a Tuesday?