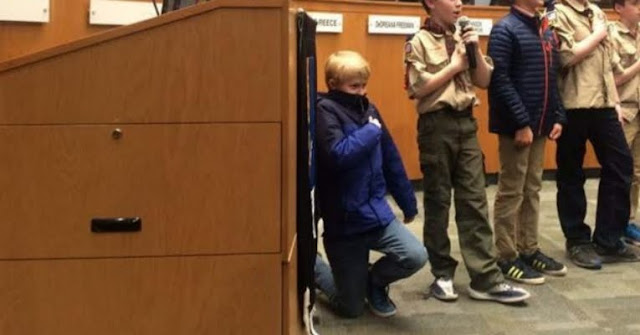 Holmes’ father expressed surprise and pride in an interview with the station, while Mayor Steve Schewel let the room know right away that the boy’s protest was welcomed at City Hall.

“To the scout that expressed his conscience by kneeling, we will say that we endorse and appreciate all expressions of conscience in the Durham City Council,” said Schewel.

On social media, others expressed their support for Holmes as well.

An inspired, and inspiring, 10-year old:

A Boy Scout took a knee during the Pledge of Allegiance. The mayor endorsed his ‘expression of conscience.’ https://t.co/p9M43AoWy8
— Jenny Bowser (@bowserjenny) February 8, 2019

We're so proud of you, Liam Holmes. ❤ You show the path to a better future for all the world.

“What I did was took a knee against racial discrimination,” he said, “which is basically [when] people are mean to other people of different colors.”https://t.co/ks6sf4VN5E
— One world no borders (@coffee_n_cream) February 8, 2019

Some also gave credit to former 49ers quarterback Colin Kaepernick for first taking a knee during the national anthem at NFL games, starting in 2016. Some football players continued the protests in the most recent season, and athletes in other professional sports have joined as well.

“What I did was took a knee against racial discrimination,” he said, “which is basically [when] people are mean to other people of different colors.”

This is why @Kaepernick7 's work is so powerful. A 10 year old, white Boy Scout from NC taking a stand against discrimination. https://t.co/GdBHFI4N3E
— Luis Sorto (@luissorto11) February 8, 2019