15 of the biggest dog breeds in the world 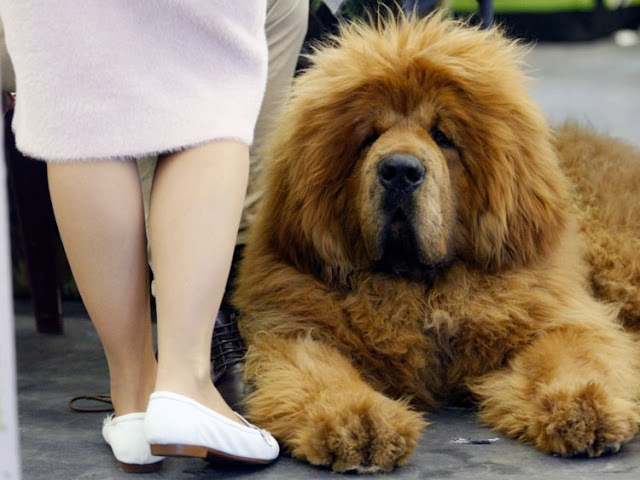 Dogs have been bred over millennia to be perfect companions, and there's a huge amount of variation between breeds. Though some pups may be small enough to fit in your pocket, many canines can grow to absolutely staggering sizes.

Here are some of the largest dog breeds in the world.

The Scottish Deerhound was born to stalk prey. 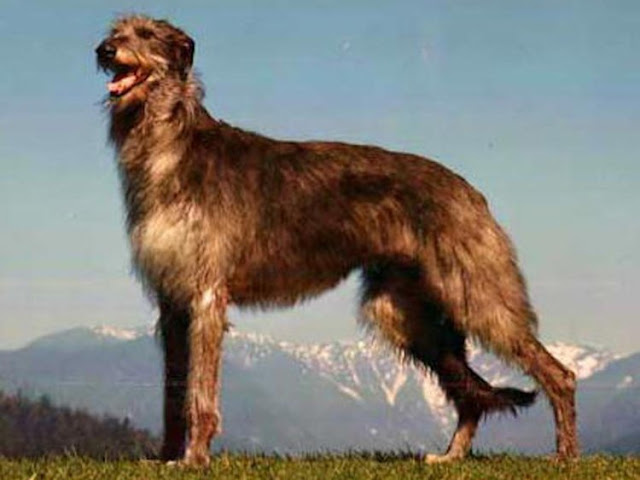 This breed is loosely related to the Greyhound, according to the AKC. However, Scottish Deerhounds are much larger and stronger than Greyhounds and can stand up to 32 inches at the shoulder. They have a stately appearance and can be a bit stubborn when it comes to training, but they are quite loyal to their owners and gentle with people. 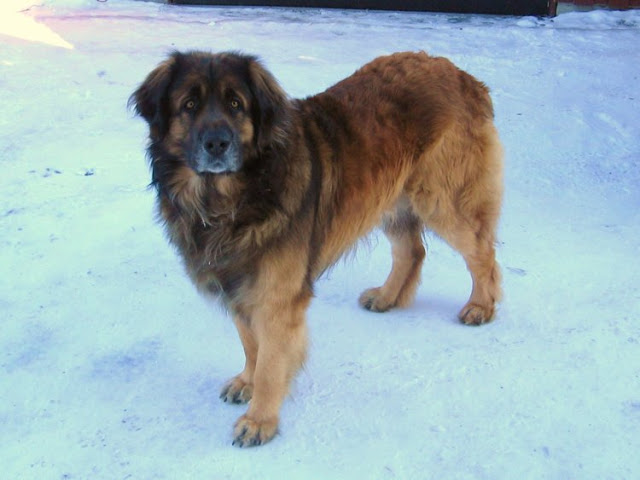 A male Leonberger can easily reach heights of up to 31 inches at the shoulder and weigh as much as 170 pounds, according to the AKC. They are usually friendly, love to romp with their owners, and are among the most trainable of dog breeds.

However, their long, lion-like coats require a fair amount of upkeep and should be brushed daily.

Newfoundlands are sweet and devoted dogs. 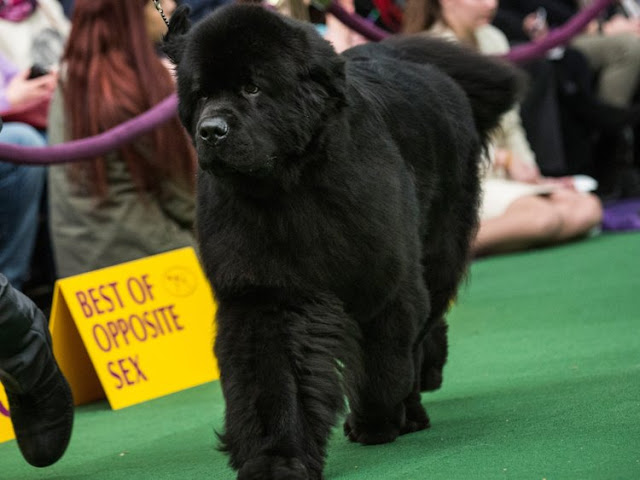 Newfoundlands usually measure in at 28 inches at the shoulder and weigh between 100 and 150 pounds, per the AKC. Though they are strikingly large, "Newfies" are renowned for their friendliness and gentle nature towards children.

They are also very trainable and usually aim to please their owners above all else.

Saint Bernards are playful and inquisitive. 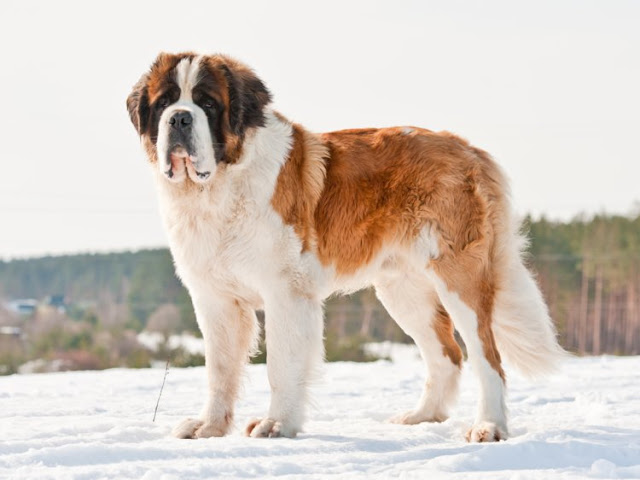 The AKC advised that many families use Saint Bernards as "nanny dogs" for children due to their patient and protective natures. These giants were bred in the Swiss Alps and stand a minimum of 27 inches at the shoulder, with most weighing between 120 and 180 pounds.

Though their fluffy coat may look like it requires constant upkeep, owners of Saint Bernards can usually get away with the occasional bath and weekly brushing. Great Pyrenees are massive dogs that are known for being intelligent, patient, and calm. The AKC estimates that most Great Pyrenees weigh between 80 and 100 pounds and stand at least 27 inches at the shoulder. They were originally bred to be working dogs on snowy sheep farms, but today they are usually encountered as loving family pets. Despite its large size, the Great Pyrenees is normally an extremely calm and mellow companion.

Bullmastiffs are brave but gentle giants. 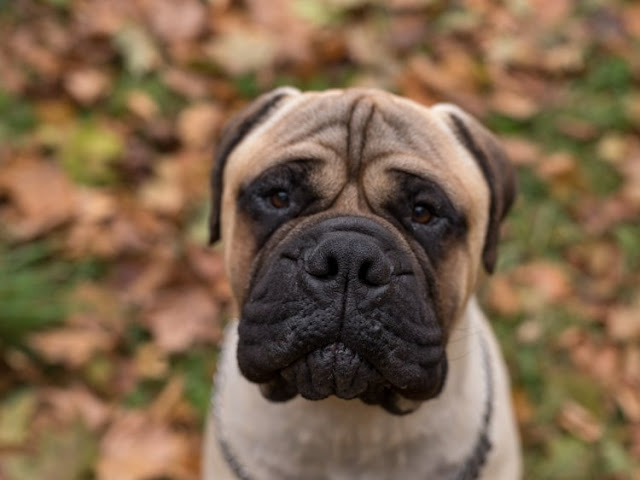 According to the AKC, the Bullmastiff is the result of crosses between Bulldogs and Mastiffs. They stand around 27 inches at the shoulder and usually weigh between 100 and 130 pounds. Training and socialization as a puppy are very important, as this lovable breed can also be quite stubborn in adulthood. 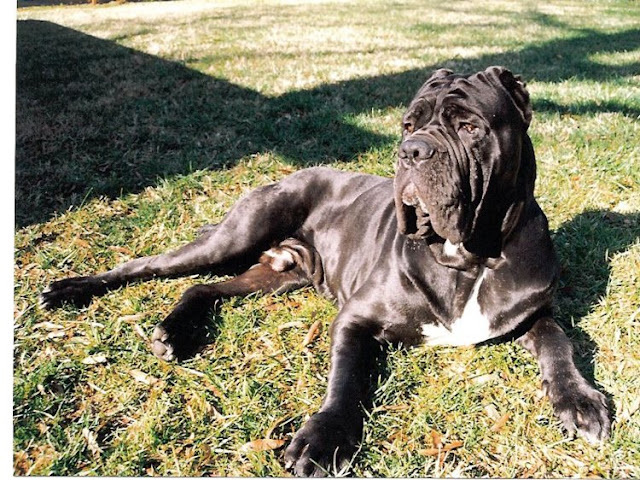 These canines were bred to be intimidating guard dogs, and they certainly fit the bill - the average Neapolitan Mastiff stands between 26 and 31 inches at the shoulder and can weigh up to 150 pounds, per the AKC. They've been around since the days of Ancient Rome and love to spend time with their owners, though they are wary of strangers. 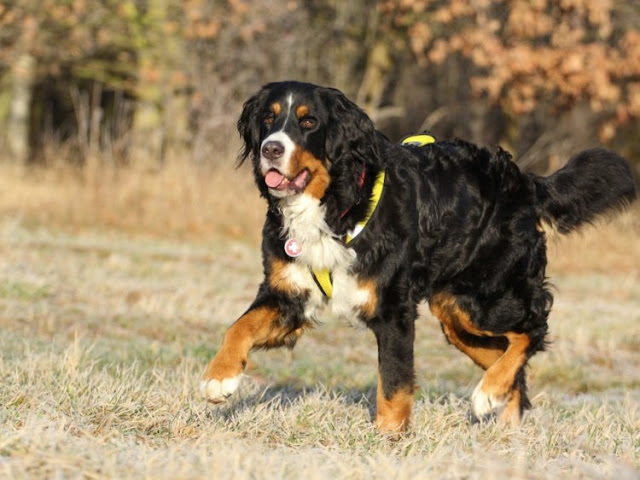 Bernese Mountain Dogs are huge, hairy, and sturdy dogs that can weigh up to 115 pounds and usually measure about 25 to 27 inches at the shoulder, according to the AKC.

They were bred in Switzerland to be working dogs and are known for their warm, friendly natures. These dogs are a good fit for families because they tend to be extra gentle with kids, but might not be a great choice for anyone averse to dog hair - Bernese Mountain Dogs shed quite a bit. 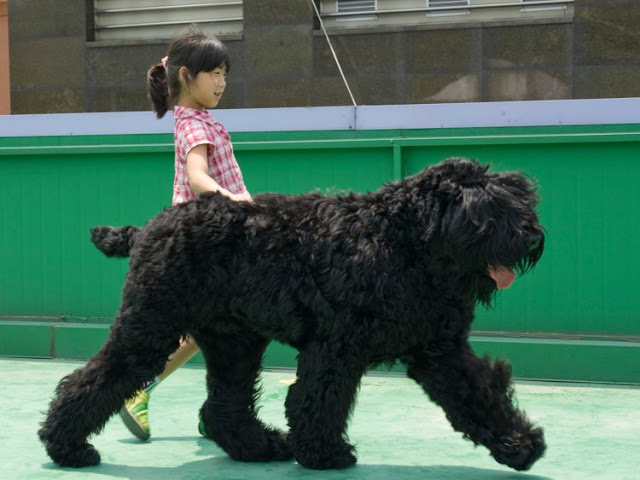 These imposing canines hail from Siberia and can weigh between 80 and 140 pounds, according to the AKC. Black Russian Terriers are also quite tall, typically standing between 27 and 30 inches at the shoulder.

Though they may look intimidating, these dogs are usually quite loyal to their owners. However, Black Russian Terriers are known to be cool to strangers, as they were bred to be guard dogs. 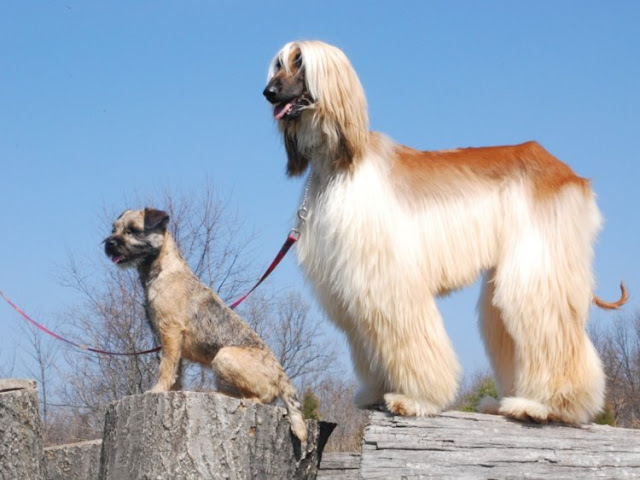 The first thing most people notice about Afghan Hounds is their long, silky coats. Though it may look glamorous, that thick coat is actually meant to help the dog survive the in the cold mountains of Afghanistan.

These dogs can easily reach heights of 25 inches at the shoulder, but some can stand as tall as 27 inches, according to the AKC. Afghan Hounds typically weigh between 50 and 60 pounds and need daily bushing to avoid tangling their thick coats.

The Dogue de Bordeaux is a French breed with a Bulldog-like head. 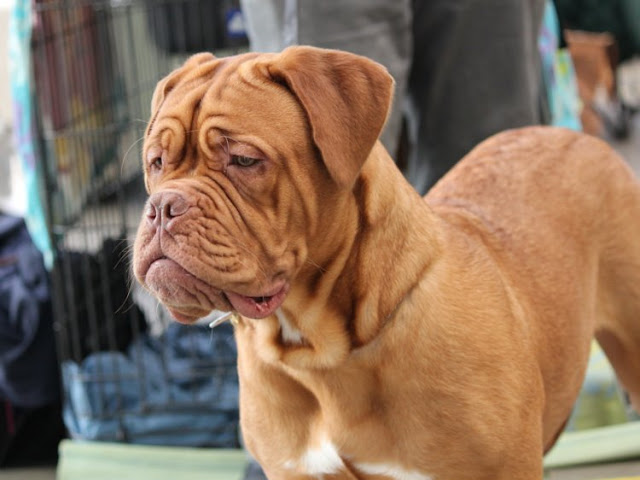 This brawny breed originally hails from France and typically weigh around 110 pounds, according to the AKC. Males usually measure about 2 feet tall at the shoulder, while females can grow even taller. Dogues de Bordeaux are affectionate and loyal, but can be stubborn if not properly trained as puppies.

Because of their stocky build, this breed should be kept from running up and down stairs in order to limit the risk of joint damage. The wrinkles around their face also need special attention and cleaning, as they can become irritated and infected if allowed to remain damp or dirty.

The Irish Wolfhound is the tallest dog breed in the world. 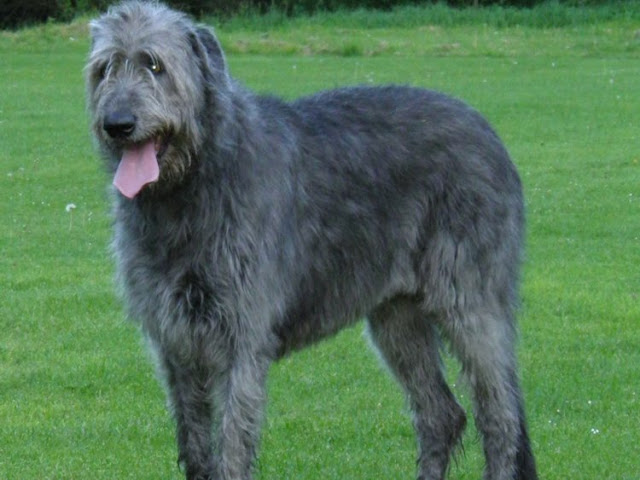 The Irish Wolfhound is a towering canine that can easily reach a height of 3 feet at the shoulder and can weigh up to 180 pounds, according to the American Kennel Club (AKC).

Irish Wolfhounds were originally bred as hunting or guard dogs by the ancient peoples of Ireland, but today are extremely serene and friendly companions. They are considered to be an extremely intelligent and emotionally sensitive breed, which makes them well-suited to therapy work.

Mastiffs are an ancient breed of enormous dogs. 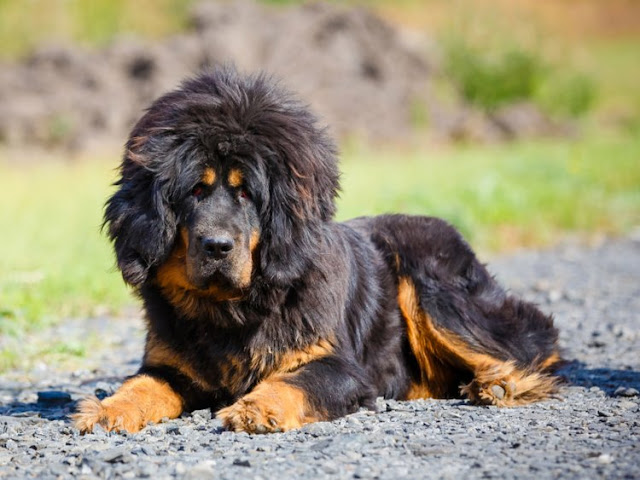 The AKC suggests that mastiffs have been about as long as civilization itself. These huge canines stand at at least 30 inches at the shoulder and can weigh as much as 230 pounds, making them heavier than many adult humans.

Though they certainly look imposing, mastiffs are incredibly loyal to their families and can be very loving. They do drool quite a bit but require minimal grooming.

The Cane Corso is an Italian breed bred to be a bodyguard. 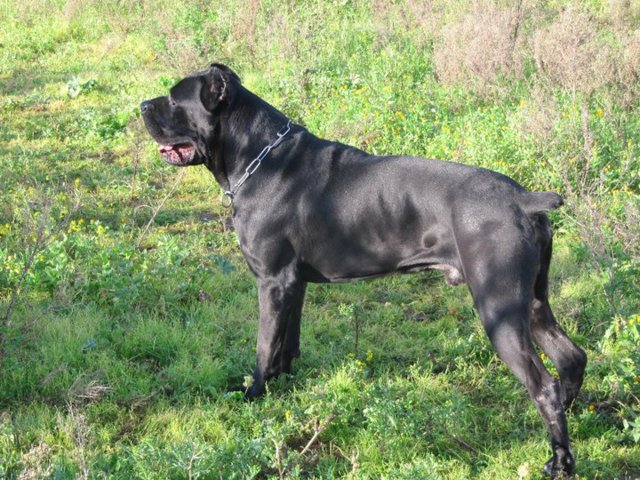 Though it may not be as well-known as the Mastiff, the Cane Corso is an ancient Roman breed with a name that loosely translates to "bodyguard dog," according to the AKC.

These canines are smart, trainable and usually stand around 28 inches at the shoulder. Their weight is proportionate to their height and can vary greatly from dog to dog. They don't require much grooming, but proper socialization and training from puppyhood is essential.

Great Danes are renowned for their staggering proportions. 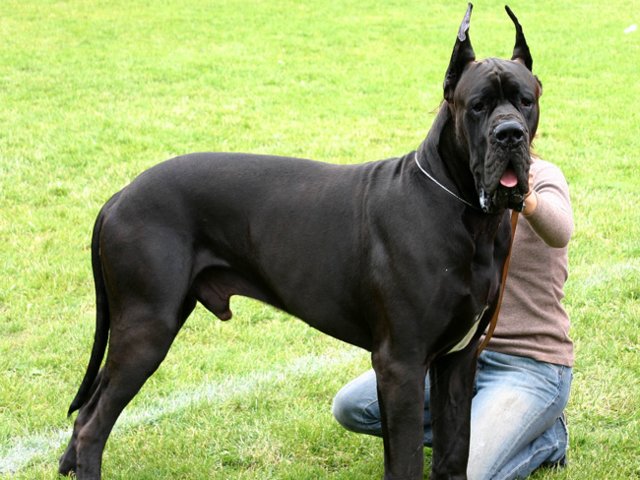 Great Danes are known for being among the largest dogs in the world. In fact, the AKC revealed that when they stand on their hind legs, Great Danes are usually taller than most people. The typical Dane measures in at about 32 inches tall at the shoulder and can weigh up to 175 pounds. They have a sweet nature but are quick to defend their territory and family when threatened.