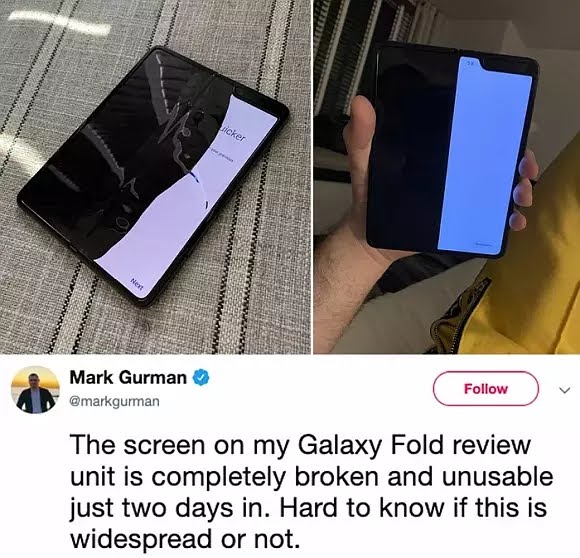 It doesn't go on sale in the US until April 26, but some review units have reportedly broken after just a few days of use. Several media reviewers come across the some problem. 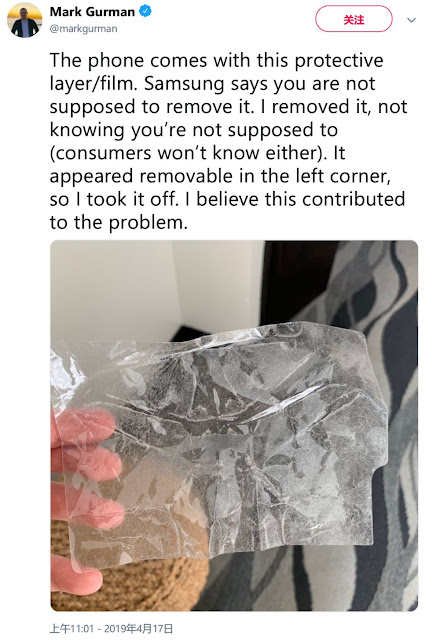 The $1,980 phone has two screens: a 4.6-inch one on the exterior that looks like a typical smartphone screen, and a second, folding screen on the interior that opens up to create a 7.3-inch display.

I got this far peeling it off before the display spazzed and blacked out. Started over with a replacement. pic.twitter.com/ZhEG2Bqulr
— Marques Brownlee (@MKBHD) April 17, 2019


A limited number of early Galaxy Fold samples were provided to media for review. We have received a few reports regarding the main display on the samples provided. We will thoroughly inspect these units in person to determine the cause of the matter.

Separately, a few reviewers reported having removed the top layer of the display causing damage to the screen. The main display on the Galaxy Fold features a top protective layer, which is part of the display structure designed to protect the screen from unintended scratches. Removing the protective layer or adding adhesives to the main display may cause damage. We will ensure this information is clearly delivered to our customers.

Dear future #GalaxyFold owners, I know I always say "No one ever read the instructions"... PLEASE READ THIS ONE!!!

(This is the wrap over the screen of the Galaxy Fold) pic.twitter.com/LuQPRfDZIE
— Des (@askdes) April 17, 2019

Dieter Bohn, editor from the Verge, didn't remove the protective layer and still come across the same problem after 1 day.

Me, @stevekovach, and @markgurman have Review Units of the Galaxy Fold with broken screens.https://t.co/AR56AV7RLa
— Dieter Bohn (@backlon) April 17, 2019