5 things Canada can do to reduce its carbon emissions 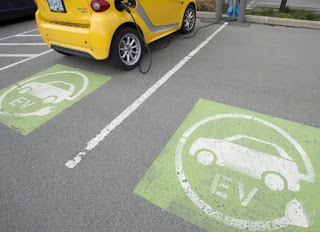 Last week, Canadians discovered the inconvenient truth that this country is warming at twice the rate of the rest of the world — and that Canada's North is heating up at nearly three times the rate.

Like many of us, Eddy Pérez, international policy analyst at Climate Action Network Canada, found the report "frightening" and "a reminder of the need to increase climate action."

On April 1, the federal government introduced the main plank of its climate plan — the much-contested carbon-pricing backstop — which sets a price of $20 per tonne of carbon, or 4.4 cents per litre of gasoline.

Pérez said the carbon tax is "a good start," but that other measures are necessary. Here, he outlines five measures in the government's Pan-Canadian Framework on Clean Growth and Climate Change, which Pérez believes "could be enhanced."

⭐ Accelerate the phase-out of coal and diesel power generation.

Coal-fired power plants are a major source of carbon emissions — for example, in closing its coal plants over the course of a decade (ending in 2014), Ontario removed the equivalent of seven million vehicles from the road. Pérez said halting coal power, as well as the use of diesel, a common fuel in remote communities, is key to reducing emissions. "The objective is to make sure [they're] not part of the electricity mix by 2030," said Pérez.

The transportation sector accounts for 25 per cent of Canada's carbon emissions. The government went some way in addressing this in the March budget by announcing a $5,000 incentive for people wanting to buy an electric vehicle (in those provinces that don't already have such a program). Pérez said the emphasis should be the broader transport sector, which could include building a robust electric charging network or implementing a national zero-emissions strategy that could include hydrogen-powered vehicles. "It goes beyond buying a single vehicle," Pérez said. "It's about having an overall strategy that increases mobility and reduces pollution."

⭐ Reduce methane emissions from the oil and gas sector.

One of the side-effects of drilling and producing oil and gas is the release of methane, a greenhouse gas that's even more potent than CO2. Pérez said mitigating the release of methane would "substantially help us reduce [overall] emissions," a fact acknowledged by the Canadian Association of Petroleum Producers.

According to this federal report, the oil and gas sector was responsible for 26 per cent of Canada's GHG emissions in 2015. Pérez said we as a country need to have "a more frank discussion" about the future of the petroleum industry in a time of global warming — and ending subsidies to the sector is a key step. (After all, it was one of Justin Trudeau's campaign promises in 2015.)

The building sector is another big culprit for GHG emissions. Governments can make these structures more efficient and thus greener by introducing building codes that mandate, for example, better insulation, more efficient lighting and the use of low- or no-carbon heating. Harmonizing federal and provincial codes, Pérez said, is the way to ensure the best results across the country.