A robot-filled, architectural marvel in North Carolina is the library of the future 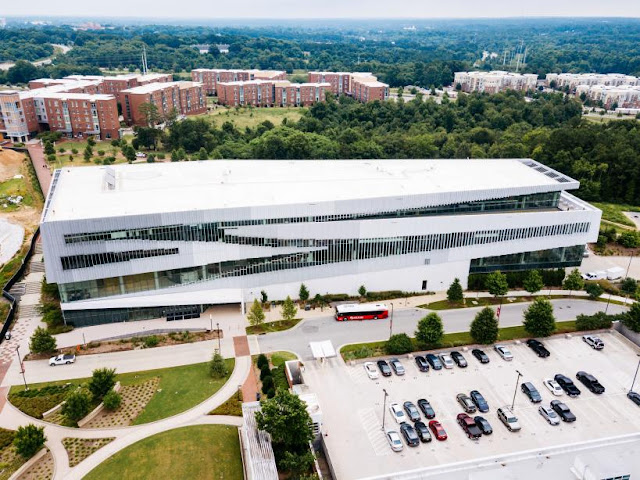 Overlooking Lake Raleigh on North Carolina State University’s (NCSU) campus is a gleaming, colossal structure. It’s a library, but quite unlike any you’ve probably ever seen before. Designed by Norwegian architecture firm Snøhetta (best known for its work on the Bibliotheca Alexandrina in Egypt) the $150 million James B. Hunt Jr. Library is an architectural marvel. It has the sleek look of an Apple store and is shaped a bit like an enormous, platinum stapler; its facade, shimmering in the late July sunshine, appears to be threaded together, a look inspired by a robust history of textile technology on campus. It stands out keenly against the neo-Georgian red brick buildings that make up most of the University’s Centennial Campus, but would be just as eye-catching in another setting.

The five-floor building covers more than 230,000 square feet (more than 21,000 square meters) and can hold up to 1,700 students. In fact, a major impetus for its construction was to increase the amount of seating and study spaces for students, but in the aftermath of 2008 financial crisis, its budget was cut by $11 million, which meant the library would have to use less material and effectively be smaller in size. Rather than discouraging administrators, it forced them to innovate.

Public libraries remain a critical public resource, but as budgets have been slashed and information digitized over the last several decades, many have been forced to adapt from book-storage rooms to high-tech public spaces. Indeed, libraries in urban areas remain an important space for those residents with limited incomes, education, and access to resources. By reimagining the relationship between information and technology and how humans interact with both, Hunt’s designers created a unique space in which the community can learn, create, or simply gather. 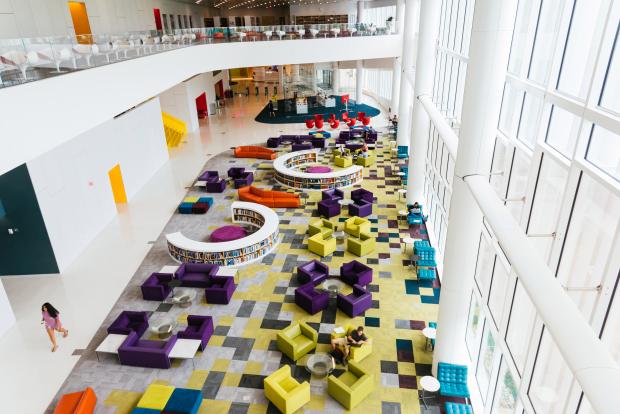 Lots of chairs to choose from at Hunt Library

An innovation wonderland
Raleigh, North Carolina is historically known for its work around life sciences, but in recent years has experienced rapid growth in its technology sector. Raleigh Mayor Nancy McFarlane notes over email that the city’s Research Triangle—a startup-heavy scene that includes NCSU, Duke, and UNC-Chapel Hill alongside nine other institutions—produces more than 50,000 workers annually “in engineering, biosciences, and information technology sectors.” Built in 2013, the Hunt Library was an early example of the city’s dedication to innovation, and upon opening received international attention for its use of advanced technology, snagging a dozen major awards including the Stanford Prize for Innovation in Research Libraries and the AIA/ALA Library Building Award. Sustainable design features, including a chilled beam system to cool the building, radiant heating panels, as well as rain gardens and a green roof, snagged Hunt a LEED Silver certification.

True to its tech-forward roots, Hunt uses a robot called bookBot to deliver books instead of housing them on traditional bookshelves. Someone who wants to check out a book makes a request in an online catalog. The bookBot (which students named Jona) then retrieves it from a five-story shelving system where the books are stored, and delivers it to the library’s front desk—all within five minutes.

The system was designed by Dematic, a supply chain technology firm, which adapted the software it uses for industries like automotive and textile manufacturing for libraries. As a result, the bot requires one-ninth the space of regular book shelving, reducing the total area of the building by 200,000 gross square feet (about 18,500 square meters). That allowed Snøhetta and its Raleigh-based partners to create a smaller building without sacrificing seating. 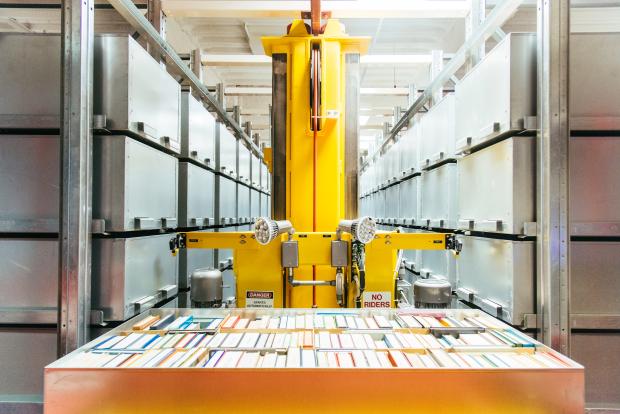 The library is also a mecca of chairs. Russell Flinchum, an art historian, author, and associate professor of design at NCSU notes that Hunt boasts more than 80 different kinds of chair designs, making the building the unexpected site of one of the world’s finest collections of 20th- and 21st-century furniture. Many of these look like works of modern art (you can sit on all of them, if you dare) but there are more familiar variations on egg, ball, and lounge chairs (most are detailed on the student-run website “The Chairs of Hunt Library”).

A curtain wall moves with the sun to leave seated spaces awash with natural light, allowing visitors to access the library’s vast resources. Thanks to state funding and private donations, the library is public, so anyone can access Hunt’s multiple media rooms and recording studios, along with its video game lab and 3-D printing studio.

Hunt still has librarians, but their roles are non-traditional (the Dewey Decimal system isn’t used here). Nikee Bayunga, a library technician at Hunt, says that staff are freed up to help students with research and projects, and, depending on their own skill sets, assist with various improvement projects at Hunt itself.


Digital media librarian Jason Evans Groth helps to manage Hunt’s audio and video recording spaces, which includes promoting workshops that encourage students to learn how to make beats, become DJs, “and other things that seem like they’re not library things.” He also heads up the library’s tech lending initiative, which includes items like synthesizers, drum machines, cameras, portable audio studios, and more. Bita Akram, a computer science graduate student at the university, says that its robust equipment lending program is one of its services on which she relies the most.

In spite of the seemingly non-traditional aspects of his job, Evans Groth sees his role as rooted in the librarian’s most traditional work: helping patrons to access information. He points to the bookBot as an example: “It’s doing what libraries have always done—getting information for patrons when they need it… I try to use the idea that I am a librarian who is non-traditional to connect people to the very traditional tenets of libraries—access, research assistance, project-making help.”

Libraries as a public resource
Libraries play an important role in low-income urban areas. For many people living there, libraries are the only place where they can find jobs, get legal or tax assistance, and access health care information.

But libraries have begun to change over the past few decades. It’s increasingly important that libraries adapt to technology—as well as patrons’ changing needs—especially in places where they’re facing budget cuts. In the US, the Trump administration has been rallying for the permanent elimination of virtually all federal funding allotted for library services, a proposal that would seriously affect the nation’s most vulnerable populations. “There are very few people that need to access books,” says Craig Dykers, founding partner at Snøhetta and lead of the Hunt project over the phone, “but also those are the people that need them the most.”

Dykers’ sentiment echos a 2010 report by the Bill and Melinda Gates Foundation that found 44% of those living below the poverty level accessed email and the internet via their local public library. And as Constance Grady noted for Vox in 2017, libraries have indispensable social value, though they’re often undervalued:

Even if people don’t use the library, they care if their community has one. A 2018 report from the Pew Research Center found that more than 90% of Americans see their library as “very” or “somewhat” important to their community, and in the past decade “every other major institution (government, churches, banks, corporations) has fallen in public esteem except libraries, the military, and first responders.” Public library attendance also remains fairly stable, with millennials driving turnout.

Meanwhile, in developing nations, libraries remain an essential means to access information, something that developed nations often take for granted but is crucial in the 21st century. This access, via the internet and with the expertise of trained librarians, empowers people of various socioeconomic levels to meet their information needs, whether it be access to housing assistance, legal resources, or just WiFi.

Worldwide, libraries keep redefining what it means to be a community space. Take Denmark’s futuristic “citizen space,” which has meeting rooms, art installations, classrooms, performance stages, and playgrounds (in addition to the usual bookshelves). In 2013, Kenya’s Narock library built a tech center equipped with computers and broadband, which enables locals to become digital citizens and grants isolated communities contact with the outside world. Indeed, Snøhetta’s own Library of Alexandria includes an actual planetarium. High-tech libraries are so ubiquitous that Denmark’s cultural agency held a “beauty contest” for tech-focused public libraries across the globe from 2014 to 2016.

A model for libraries of the future
Outside of access to information, libraries are so much more than just places that house books. Spaces like the Hunt Library are not only, as NCSU design professor Flinchum describes them, “giant boats filled with knowledge”—they also work to bring people together and engage in an exchange of ideas.

In fact, this latest imagining of the role of the library, a high-tech hub where it seems books are irrelevant, is actually a call back to the original idea of the library, which is a space designed to allow groups of people to come together. As Dykers puts it, “[Hunt is] a place for people to meet, to test ideas, talk about new ideas. It’s more of an incubation chamber, a place where you make things and not just take things.” The exterior of Hunt Library

“Whether or not you’re talking about a library focused on digital technology or on books or papyri, as the ancient libraries were, the most important thing is to make a library open and accessible,” he adds, noting that books weren’t invented until centuries after the first libraries came about. “[Libraries] had museums, they had lounges, they were interactive and in a very vibrant way,” he says, “more like libraries of the future.”

That’s exactly how locals see Hunt. “Technologies do not go away, and a library’s dedication to access means that, no matter what the technology is, we’ll find a way to make it accessible to people,” Evans Groth says.

Indeed, as technology brings about rapid changes in nearly every industry, it would seem that libraries—too often imagined as dreary, fluorescent-lit places of book-filled silence—would be an early victim of digitization. But libraries aren’t going anywhere soon, they’re simply evolving. The Hunt Library is an incredible example of this evolution; what’s more, it’s a useful model for libraries—in North Carolina, the US, and across the globe—that are seeking to adapt to the changing role libraries in society.