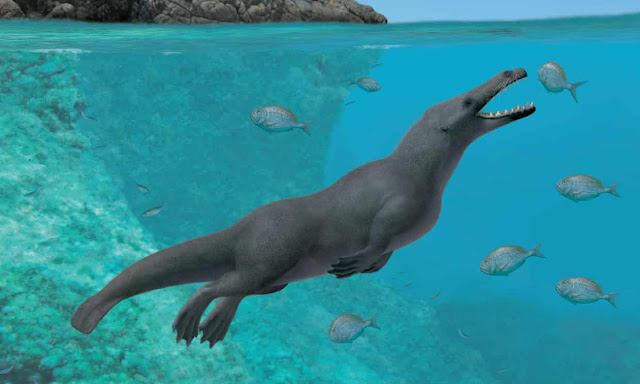 Artist's rendering of the Peregocetus pacificus, whale which could live on land and water (Credit: A. Gennari/CellPress)

Researchers have long known that the ancestors of the mighty whales were nimble, four-legged creatures that were comfortable both on land and in the sea. However, given that the only evidence of the early mammals had been found in present-day Pakistan, India, and parts of Africa, scientists were unsure of how the mammals had dispersed to the Western Hemisphere. Now, thanks to the aptly-named Peregocetus pacificus (P.pacificus), or "traveling whale that reached the Pacific," paleontologists finally have an answer to this all-important migration mystery.

The team of scientists led by Olivier Lambert, a vertebrate paleontologist at the Royal Belgian Institute of Natural Sciences in Brussels, stumbled upon the remains of the ancient creature in the marine sediments along the southern coast of Peru, South America in 2011. The pristinely-preserved bones, estimated to be almost 43 million years old, included the mammal's jaw, legs, portions of the spine and tail, and pelvis, as well as fore and hind limbs. The scientists believe that the Peruvian mammal is evidence that whales, helped by the westward surface currents, crossed the South Atlantic from the western coast of Africa to South America, before eventually coming to North America.

Lambert said, "This is the first indisputable record of a quadrupedal whale skeleton for the whole Pacific Ocean, probably the oldest for the Americas and the most complete outside India and Pakistan." 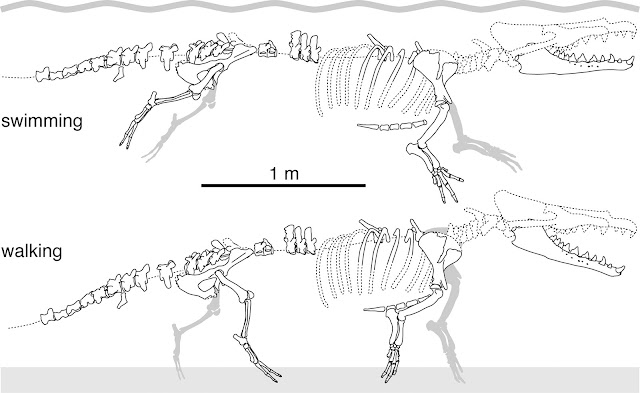 The intact specimen is the first evidence of the ancient whale in the Americas (Credit: Olivier Lambert Et Al./Cell Press)

The ancient whale, which resembled the modern-day otter, had four legs, elongated toes, sharp teeth, and maybe even fur. The shape of its legs led the scientists to infer that the 13-foot-long (4-meter) mammal was capable of carrying its 200-pound body on land. However, the researchers don't believe it traversed great distances or spent much time on the ground. “I think they were not very good at walking, and certainly not at running,” said Lambert. He believes the whale lived mostly in the water and emerged on land only for specific activities, such as breeding or to give birth. The mammal's elongated snout, well-developed canines, premolars, and molars, which indicated that it fed on fish and crustaceans, gave further credence to the theory.

The creature's powerful tail and hoofed feet, which the researchers believe were most likely webbed, suggest it was a strong swimmer. Lambert and his team, who published their findings in the journal Current Biology on April 4, 2019, believe that similar to otters, the P.pacificus began swimming by pushing back with their hind legs and then stayed afloat by undulating their bodies up and down from the tail to the hip. Since the last few tail vertebrae were missing, the scientists could not verify if the tail featured a fluke — the large paddle which allows modern-day whales to power themselves to speeds exceeding 30 mph (48 km/h). 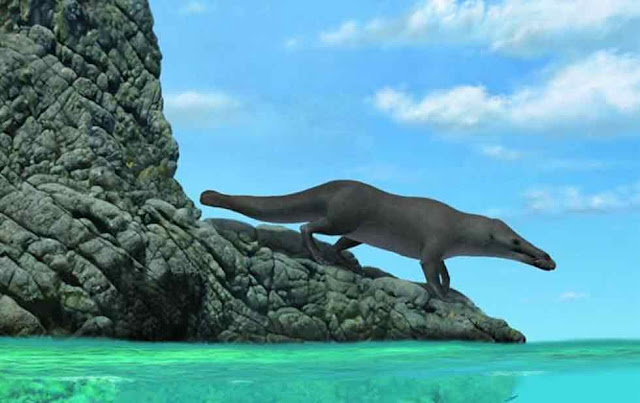 Artist's rendering of the four-legged P.pacificus, which came on land to breed and give birth (Credit: Alberto Gennari/CellPress)

In addition to settling the whale migration debate, the Peru specimen is also important evidence of how whales evolved to become ocean dwellers. To travel such great distances, the mammals would have had to spend days or even weeks at sea and therefore develop the ability to sleep in the ocean. "As whales spent more time swimming, they gradually lost their hind limbs, which interfered with a swimming motion that relied primarily on tail movement," Lambert said.