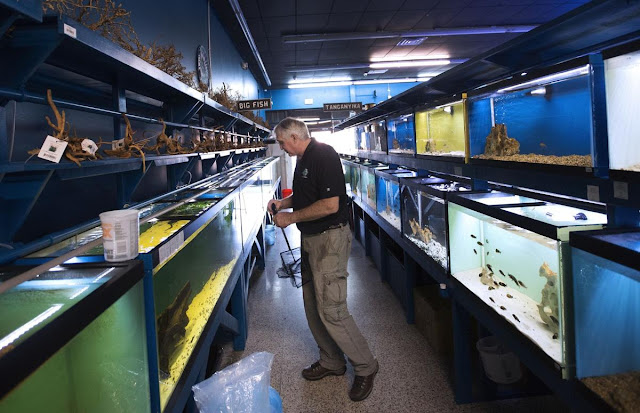 The king of the jungle is back, only now he's traded in his crown for a trident.

Like in his first shop, Hames has about 500 tanks of fish from all over the globe.

What customers won't find inside Hames' new store are reptiles, birds, mice or exotic animals like the African cat named Mikeeto that lived in the old store.

He's scaled back his business model this time, he said, and stuck to what he knows best: fish.

"I don't want to get bitten by another bird, lizard, mouse, snake, you name it, ever again in my life," Hames said, chuckling.

Hames was 19 when he opened Animal Jungle inside Pembroke Mall. He eventually moved the store to a sprawling 26,000-square-foot space on Holland Road.

After running the business for 40 years, he decided to close shop and take it easy for a while.

When Animal Jungle closed, Hames worked quickly to find homes for several animals who lived at the store full-time — Komodo dragons, tortoises, stingrays and macaws. Most were spoken for quickly, going to new owners who Hames was confident could provide great care for them.

But Mikeeto caused him to worry. The cat had to be rehomed to an owner with proper licensing which isn't attainable in Virginia. At the last minute, Hames said, a wildlife reserve outside of Franklin stepped in and took the cat.

"Everyone found good homes," he said. "And after that, I had absolutely no intention of returning to business."

But after a couple of years, Hames had a change of heart. He planned his return for about a year and a half before he found just the right space for his store.

In a lot of ways, the aquatics store is akin to its predecessor. The bubbling of filtration systems — pumping clean water into rows of brightly-lit tanks 24 hours a day — echoes through the aisles of colored fish, coral and anemones. Nearly every display and stand are handcrafted.

As he did before, Hames still makes regular trips to Florida to hand-select fish for his tanks. He's added day trips to New York to find fish he can't get elsewhere.

And he's serious about taking care of them, too.

He starts each morning by feeding the fish, which he said takes a little over two hours. Most get a second and third feeding later in the day.

He keeps a small staff and only takes on employees who already understand what it means to keep a tank clean.

"We're all fish people here," Hames said, walking along tanks of fish from Malawi, Africa. "If you can't explain the nitrogen cycle, you're out."

Bob Claffy said he's known Hames since he was 14 years old. He used to clean cages and feed animals as a kid in exchange for fish food and supplies.

When Animal Jungle closed, it left a serious void in the aquatics market, Claffy said. There wasn't another store in the state that paid attention to detail as Hames did, he said.

When word got out that Hames was opening a new store, Claffy said, Facebook groups for fish hobbyists "went bananas."

Hames set up a large pond near the front of Jungle Aquatics that houses turtles and large fish, similar to the pond at the entrance of Animal Jungle. Claffy placed his own fish — a 27 inch, pale pink gourami named Bert — into the pond, christening the water of Hames' new store.

"I didn't want to give that fish to anyone else. Bert probably thinks he's died and gone to heaven."