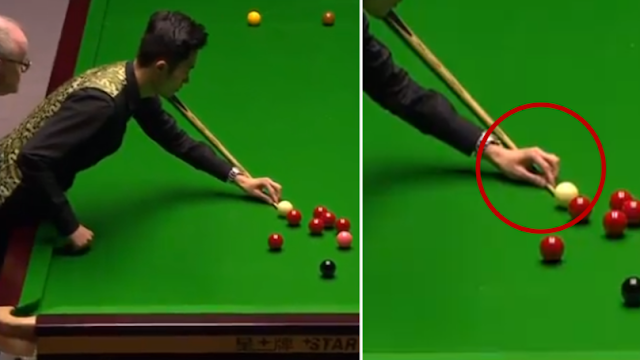 Neil Robertson might have won the Scottish Open Final back in 2017 after a thrilling comeback on the Sunday evening, but Chinese player Cao Yupeng's audacious shot during the match got everyone talking.

Snooker legend Dennis Taylor said that in 60 years of playing Snooker, he had never seen a shot played like the one Yupeng played in the final and we have to agree.

In 60 years of playing Snooker, I have never seen a shot played like the one Cao Yupeng played on @Eurosport_In the Scottish Open Final.
— Dennis Taylor (@dennistaylor147) December 17, 2017

Robertson, who lifted his first ranking title since 2016, came back from 8-4 down to win 9-8 in a brilliant end-to-end finale as both players produced genius on several occasions.

But Is this shot genius?

We just can't decide what the hell it is, but fair play to Cao Yupeng for trying it.

Yupeng held the cue by its tip, touching the cue ball ever so slightly to produce the strangest safety shot of all time.

But it wasn't enough for the Chinese player, who impressed throughout the tournament.

Is this illegal? Here's how the rest of social media reacted to this outrageous piece of play at the time:

Authorities will b looking at the rules after that 1 Ul no c that again..never a snooker shot in its life
— jpkenna (@JpKennajp) December 17, 2017

Can’t see why it would be an illegal shot? Both feet on the ground, only difference is he used one hand instead of two?
— Jon (@JonJlydiatt) December 17, 2017

In 60 years of playing Snooker, I have never seen a shot played like the one Cao Yupeng played on @Eurosport_In the Scottish Open Final.
— Dennis Taylor (@dennistaylor147) December 17, 2017