Dad spots stranger making friends with his toddler at airport

No Comments
For the vast majority of us, trips to the airport can be at best a tedious experience. So often they’re crowded places, full of people hurrying to one place or another, or else sitting for long stretches with very little to do except cast the occasional glance at the departure board.

Author and public speaker Kevin Armentrout might have expected such frustrations while at the airport recently with his 16-month-old daughter. His experience, however, proved to be one so memorable that he had to share it with the world. 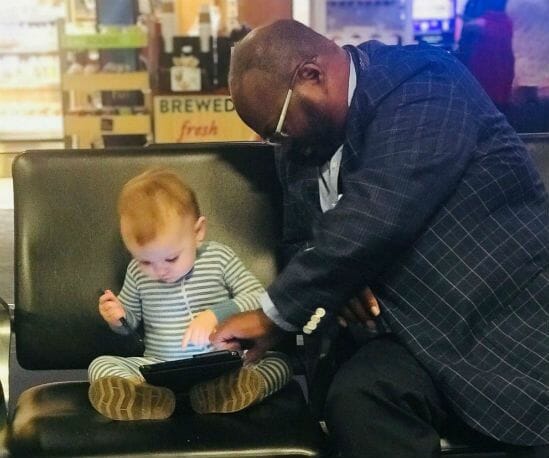 Joseph Wright is a sales manager from Oklahoma, but it turns out he has a heart of gold to boot.

He struck up a friendship with 16-month-old Carter Jean Armentrout that left her father Kevin overloaded with emotion.

“Last night, while waiting to board our plane, [Carter Jean] was being her usual inquisitive self wanting to meet and say ‘hi’ to everyone she could, until she walked up on this man,” he wrote.

“He reached out and asked if she wanted to sit with him. He pulled out his tablet and showed her how to draw with it, they watched cartoons together, and she offered him snacks. This wasn’t a short little exchange, this was 45 minutes. Watching them in that moment, I couldn’t help but think, different genders, different races, different generations, and the best of friends. This is the world I want for her.

“In a country that is continuously fed that it’s so deeply divided by beliefs, I want her life to be filled with moments like this… not liberal or conservative republican or democrat, socialist or capitalist, just HUMAN.”

What’s more, Armentrout admitted in an interview with Yahoo Lifestyle that Jospeh had shown an endearing patience with his daughter.

“There were a few moments she screamed and tried to get into his work calendar, but he couldn’t care less,” he said.

Fortunately, Armentrout’s post was able to find its way to Joseph’s friends, who were left unsurprised by the sentiment.