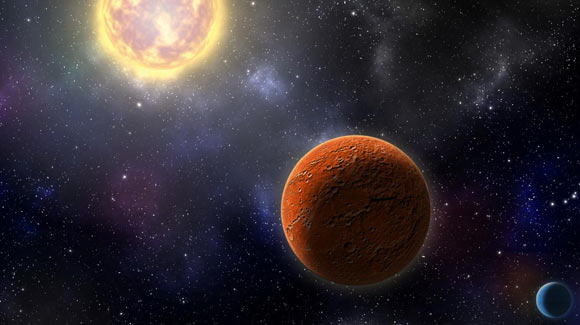 The newly-discovered planet orbits HD 21749, a K4.5 dwarf star located 53 light-years away in the constellation Reticulum.

The planet is only 10% smaller than Earth and is likely a rocky though uninhabitable world, as it circles its parent star in just 7.8 days — a relatively tight orbit that would generate surface temperatures on the planet of up to 800 degrees Fahrenheit (427 degrees Celsius).

“Measuring the exact mass and composition of such a small planet will be challenging, but important for comparing HD 21749c to Earth,” said co-author Dr. Sharon Wang, a researcher in the Department of Terrestrial Magnetism at Carnegie Institution for Science.

The star also hosts a second planet, HD 21749b, a warm sub-Neptune with a longer, 36-day orbit, which Dr. Wang and colleagues reported previously and now detail further in a paper in the Astrophysical Journal Letters.

Its density indicates the planet has substantial atmosphere but is not rocky, so it could potentially help astronomers understand the composition and evolution of cooler sub-Neptune planet atmospheres.

According to the team, the HD 21749 system is a prime target for comparative studies of planetary composition and architecture in multi-planet systems.

“Because TESS monitors stars that are much closer and brighter, we can measure the mass of this planet in the very near future, whereas for Kepler’s Earth-sized planets, that was out of the question,” said lead author Dr. Diana Dragomir, a postdoctoral researcher in MIT’s Kavli Institute for Astrophysics and Space Research.

“So this new TESS discovery could lead to the first mass measurement of an Earth-sized planet. And we’re excited about what that mass could be. Will it be Earth’s mass? Or heavier? We don’t really know.”