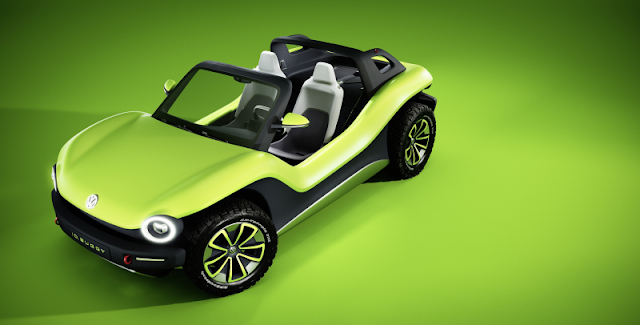 Volkswagen teased an all-electric dune buggy concept built on their new modular MEB platform and heavily inspired by ‘60s-era Beetle-based dune buggies like the famous Meyers Manx. We’re now seeing it in all it’s bright green glory before it shows up at the Geneva Motor Show, and, excitingly, it’s got more in common with those old air-cooled Beetle-buggies than you’d think.

First, it’s actually rear-motor’d like the orginal dune buggies. Sure, it’s an electric motor making 201 horsepower instead of an air-cooled flat-four making 50 hp if you’re lucky, but at least VW’s finally putting some motors in the right place. 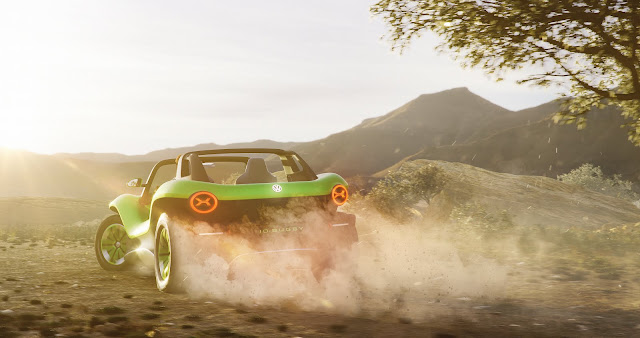 That also means that, like an old Manx, it’s RWD, but now VW says there could be an option for an additional motor up front for AWD:


As an alternative to the rear-wheel-drive layout, it is also possible to fit a second electric motor in the front axle of the ID. BUGGY. In this case, an “electric propshaft” would distribute the power of the 4Motion® four-wheel drive between the front and rear axles in fractions of a second.

The concept of the “electric propshaft” I think is a deeply strange way to describe the electrical connections between the motors. I mean, I see the analogy they’re making, but comparing a bunch of electronic signals to a simple spinning rod just feels a little, uh, forced. 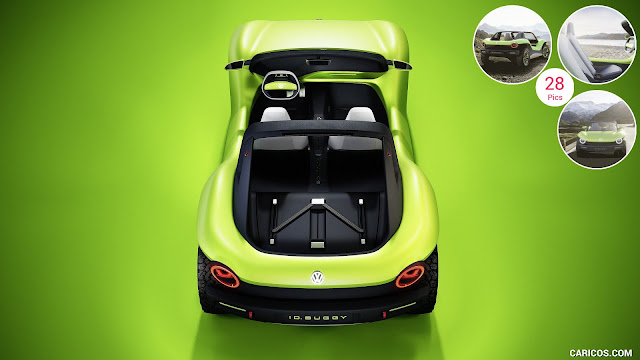 The big thing, though, that makes the ID. BUGGY a true successor to the original VW-based off-roaders has to do with how it’s built:


Like the dune buggies of the 60s, ID. BUGGY is extremely versatile. All buggies from the 60s featured a high degree of modular variability—based on the chassis of the legendary Beetle with a four-cylinder boxer engine running at the rear. Small-series manufacturers stretched a body made of fiberglass over the chassis and engine of the Beetle, thus writing automotive history.
[...]
The same versatility is possible with ID. BUGGY—while the ID. BUGGY concept car is a pure 2-seater; it can also be converted to a 2+2-seater and an additional electric motor could be added to the front axle in order to make four-wheel drive possible. In addition, the BUGGY’s modular design allows for the composite upper body to be detached from the MEB chassis, opening up a world of possibilities for third-party manufacturers, as the original Meyers Manx kit did for the first buggies.”

This idea, that you can have a ready-to-drive rolling chassis and pop bodies on and off at will is what gave birth to the once-huge VW-based kit car industry. That original Type I Volkswagen design had such a chassis, and that gave the fundamental design incredible flexibility. 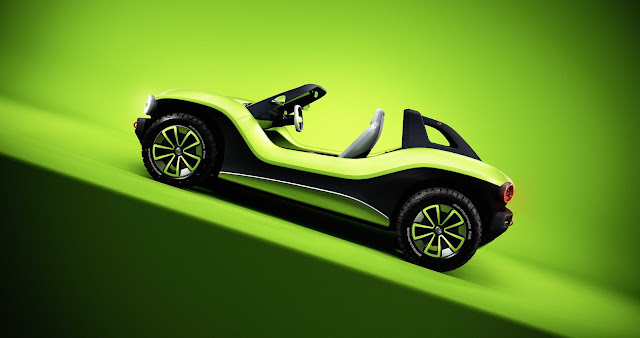 If Volkswagen is really able to recapture some of that with their new MEB platform, that has the potential to be a big deal in the future, possibly even heralding a new era of kit cars, if I can be so bold as to dream.

Now that we can see all of it, the design of the ID. BUGGY I think is very strong and fun. It’s clearly taking cars like the Manx as a starting point, but it’s absolutely modern and not at all cloying or overly sentimental. 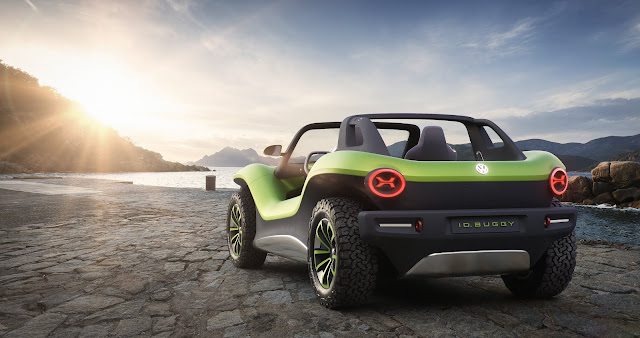 The lighting design is very clean and highly graphical, with circles circumscribing rectangles up front and X’s at the rear. The headlamps are also not entirely integrated into the body, suggesting the old chrome, separate bullet-body lights of old.

No grille is needed, so it can keep the Manx-style shark-nose look, and the wave-like door-less side profile, which kicks up at the rear, works very well, especially with the two-tone design of upper colored areas and lower, inset black panels. 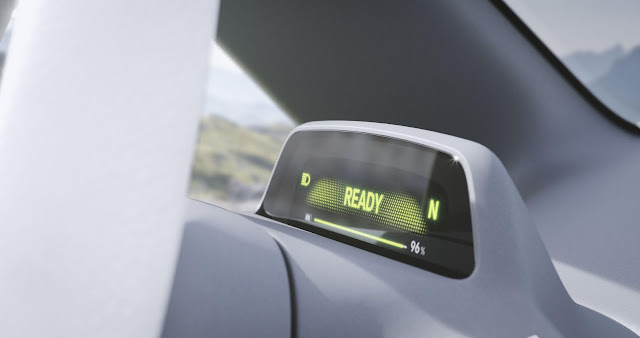 The interior is admirably clean and uncluttered, with all instruments in one LCD screen pod right in front of the driver. Everything looks like it could withstand sand and water and vomit and just be hosed out and good to go the next day. 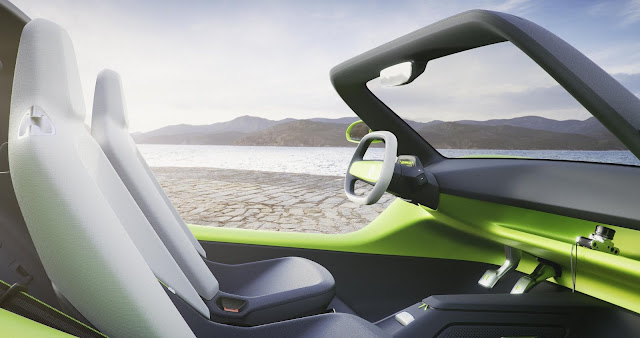 I really like this thing, and I think VW did a great job of capturing the essence of what a dune buggy should be. I wish I could believe that something like this could make it into regular production, and you could just buy one from a VW dealer, but I just can’t believe that. 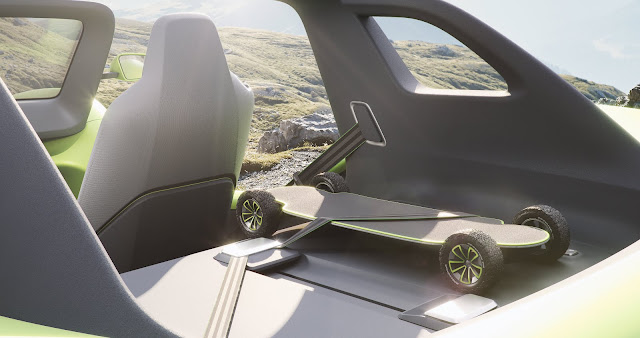 However, VW’s hinting about how bodies can be easily mounted to the MEB chassis does give me some hope that maybe, just maybe, VW will actually sell bare MEB chassis to companies (maybe even individuals?) and kit car-style bodies, including something like this, could be possible to buy. 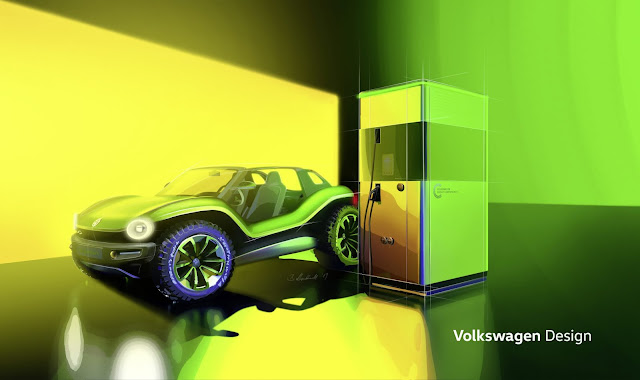