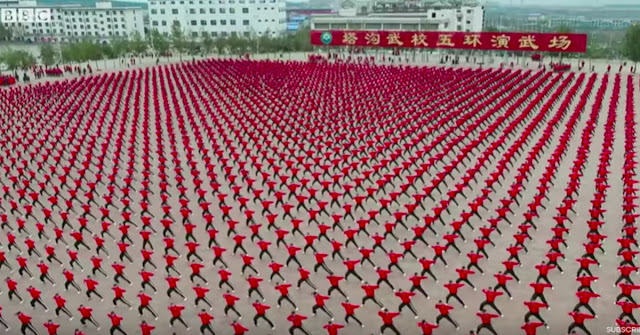 When you think of satellite images, you probably imagine aerial views of great rivers, forests, and icy terrains. Because of our size, it’s unlikely that space satellites can capture human beings here on earth—but what if we gather en masse? As part of a new BBC Earth video series, titled Earth from Space, one episode captures the spectacular choreography of thousands of Chinese students training in Shaolin Kung Fu.

Shaolin Kung Fu is one of the oldest and most famous styles of Chinese martial arts. It’s already impressive when seen from the ground; but from above, it’s even more spectacular. The BBC Earth camera team followed the enormous group display on foot, while satellites in space captured the mesmerizing abstract shapes they make from an aerial view.

These students are clearly dedicated to their practice—the video’s birds-eye view perspective reveals their flawless grid-like formations and precise movements in perfect unison.

You can see more from the Earth from Space series on the BBC website.