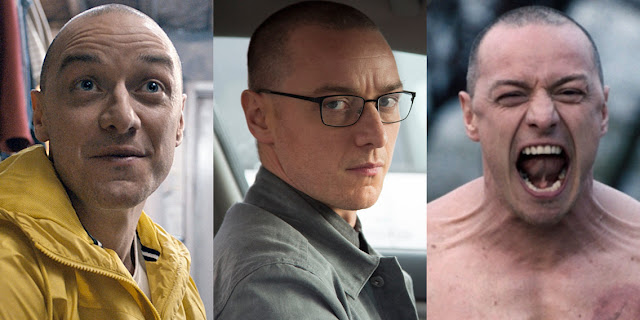 "Glass" is now available on Blu-ray and M. Night Shyamalan's latest movie reunites Bruce Willis and Samuel L. Jackson's characters from his 2000 film, "Unbreakable." It also introduces both of them to James McAvoy's Kevin Wendell Crumb from "Split."

McAvoy's performance became a standout of 2017 for playing a young man with dissociative identity disorder who has 24 different personalities. Though he never plays all two dozen characters in "Split," we do see him effortlessly transition between eight significant roles.

Audiences learn the names of all the other identities Crumb can take on near the end of "Split" via a computer found in his lair beneath the Philadelphia Zoo. Collectively, the more evil and dangerous identities are known as the Horde.

Kevin Wendell Crumb's personalities can be seen recorded on multiple files on a computer where Kevin lives.

"Glass" introduces viewers to several more of the characters, though all of their names are never spoken aloud. There are two dozen identities associated with Kevin Wendell Crumb that we meet in the movies.

Kevin appears for the first time near the movie's end. He doesn't realize what year it is.

Kevin is the main character James McAvoy plays who has dissociative identity disorder.

Through flashbacks in "Split," we learn Kevin's mother was abusive and suffered from obsessive-compulsive disorder (OCD). After Kevin's father mysteriously disappeared on a train one day, the young boy grew up suffering from abuse at the hands of his mother which caused Kevin to retreat into other personalities to protect him. We will see Kevin again in "Glass."

When Kevin appears in "Split," he has no recollection of what has happened while his other personalities have emerged. 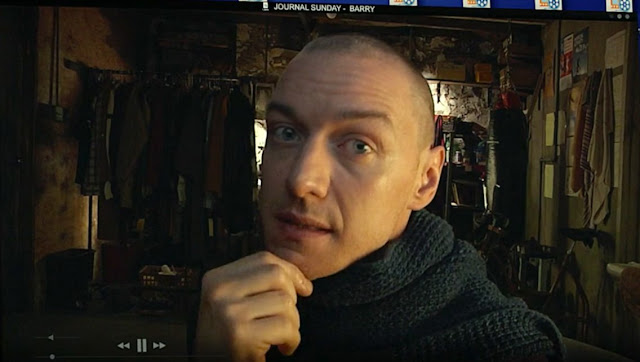 Casey finds a video file featuring Barry while kidnapped by the Horde.

In "Split," Barry regularly visits a therapist, Dr. Fletcher, to keep the Horde in check. For a long time he was the identity in charge of which personalities could come out and take control of Kevin's body until he was overtaken by several others. Barry also has a deep understanding of fashion and design. We see him carry around a portfolio of sketches.

Throughout the movie, he tries to send emergency emails to Dr. Fletcher to warn her about other, dangerous personalities taking control. 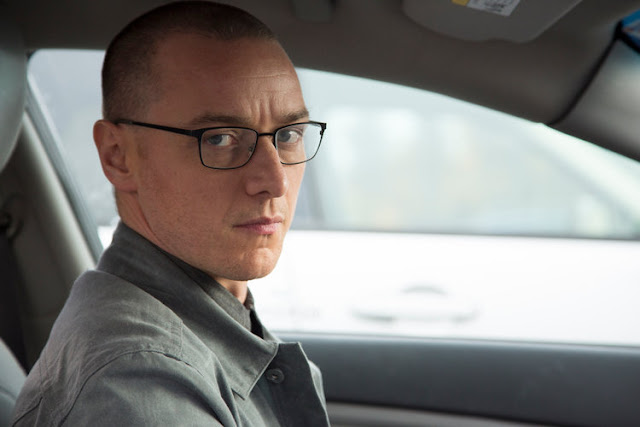 Dennis' character wears glasses and likes everything to be orderly.

Dennis is the first of Kevin's other identities we're introduced to in "Split." At the start of the film, he kidnaps three teenage girls and asks one to dance for him. As the movie progresses, we learn he likes to watch young girls dance naked and, for that reason, the others try to keep him from emerging.

Similar to Kevin's mother, Dennis has OCD and is obsessed with cleanliness. According to Dr. Fletcher's files briefly seen in "Split," Dennis is one of two caretakers of the group. The other is Patricia. 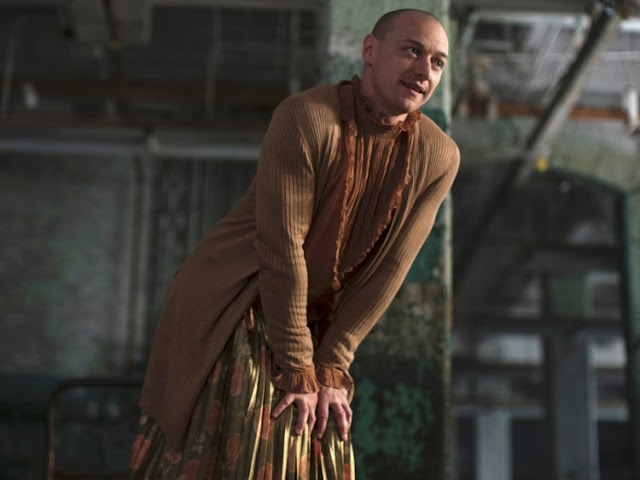 James McAvoy often wears a dress when he takes on the role of Ms. Patricia.

Ms. Patricia is an orderly, older woman who tries to keep the other personalities in check. For the most part, she's a calm and polite motherly figure, but her perfectionism causes her to be considered unstable. This is best seen when Patricia gets upset after cutting a sandwich unevenly and needing to start over.

For that reason, Ms. Patricia was banned from controlling Kevin until she and Dennis overthrew Barry. Patricia will appear again in "Glass," as seen in the photo above. 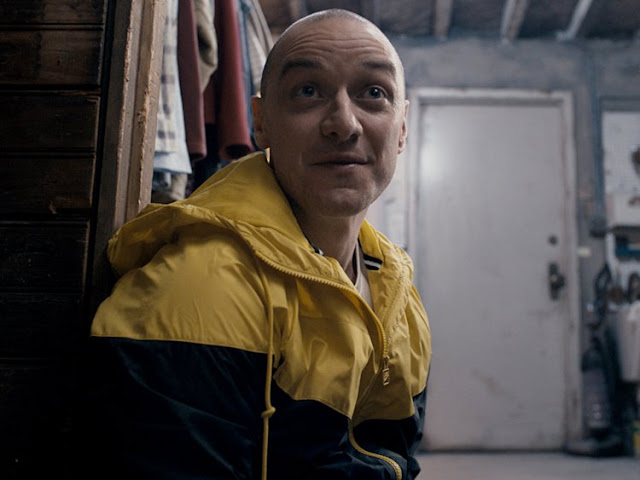 Hedwig often wears this yellow wind breaker with a hoodie.

The naive, nine-year-old child who can take control of Kevin's body whenever he wants. Hedwig befriends Casey while she's captured by Dennis in "Split" and he divulges that he's a big Kanye West fan along with a dancer. He often repeats several things over, including the fact that he has red socks.

Most noticeable about Hedwig is that he speaks with a lisp. Expect to see more of him in "Glass." 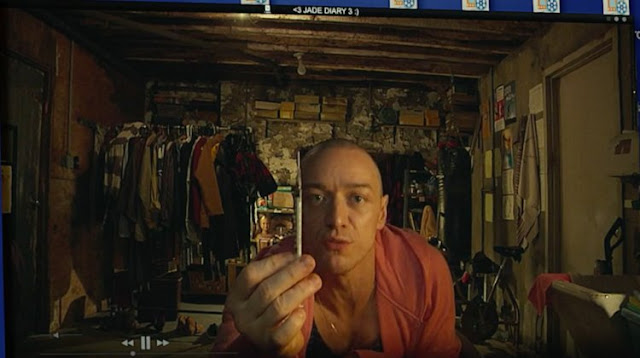 Jade is seen giving herself an insulin shot during "Split."

Jade is one of several identities we see appear on video logs. We're not given an age for the character, but she acts like a teen. (Her vlog is labeled with a heart next to her name.) Jade says she has diabetes and takes insulin shots to manage it.

In "Glass," Jade flirts with Daryl at the psychiatric hospital as a means to try and escape. 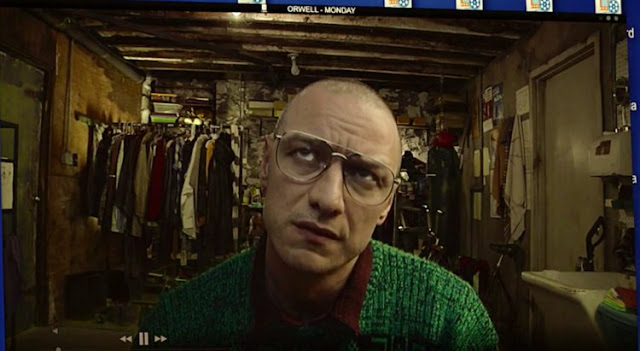 Orwell looks like he could be your history teacher.

Orwell is also one of the characters who appears on a video log before speaking briefly to Casey. He appears to be a historian, and is not in favor of unleashing the Beast. 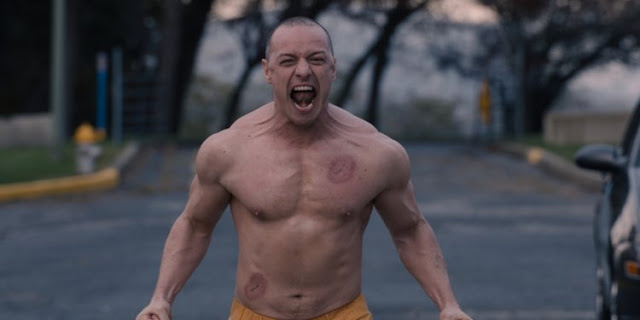 The Beast prefers showing off his strength shirtless. Here he is in an image from "Glass."

Kevin's 24th personality first shows itself near the end of "Split" after Dennis leaves flowers for Kevin's father at a train station terminal. The Horde transforms into what they refer to as the Beast. He appears more physically built than Kevin and has the ability to climb walls, run quickly, and, near the film's end he bends steel bars. He also kills and eats two of the girls he kidnaps in "Split."

A police report at the end of the movie claimed the beast's identity was a blend of animals from the Philadelphia zoo where Kevin worked. In "Glass," Elijah Price (Samuel L. Jackson) wants to team up with the Beast.

Though never seen, it's mentioned that Heinrich is among the personalities who's worried about the Horde in "Split."

Samuel is never seen, but it's mentioned briefly in "Split" that he's also concerned about the Horde. 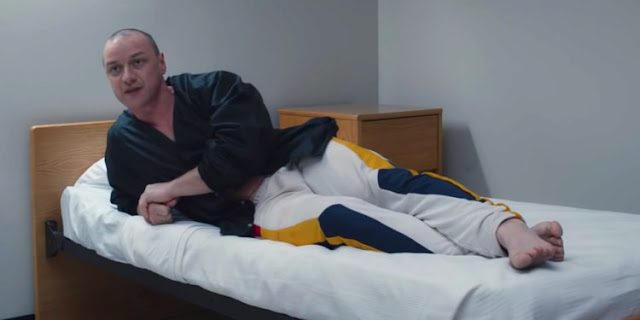 McAvoy refers to himself as Mary Reynolds in a trailer for "Glass."

This newer personality is seen briefly on a bed in "Glass."

Ian is also introduced in "Glass." He has a heavy accent and says he is twins with Mary Reynolds.

Norma is an overly polite and apologetic woman first seen briefly in "Glass."

Similar to Orwell, Mr. Pritchard is an intellect and tells us he's a professor when he appears in "Glass."

Luke speaks briefly with Mr. Glass (Samuel L. Jackson) in a heavy accent. As the two prepare to escape from the hospital, Luke warns that he has a big mouth, causing Mr. Glass to rely on another one of Kevin's identities to take charge.

In an interview with Fandango, director M. Night Shyamalan says Luke's identity is a nod to his editor Luke Ciarocchi.

"Luke is one of the editors on the movie, and he has a bad reputation for telling you the ending of movies. So when we're at lunch, whenever he says, 'Oh, I saw that movie.' He'll inevitably start…and we'll all say, 'Stop! Stop! Stop!" said Shyamalan. "And he gets angry at us and says, 'What? I'm not going to say anything. I'm not going to say anything.' And then he'll say something like, 'Everybody knows…' And we all just scream at him, and he gets angry and just storms off. He'll be very angry I told you this."

Here are the remaining identities:

Some of the following also appear in "Glass," but they're never specified distinctly as McAvoy transitions between characters quickly. Among them is a young man who yells out to Dr. Ellie Staple that they almost tricked her and a woman who speaks in nervous Spanish.