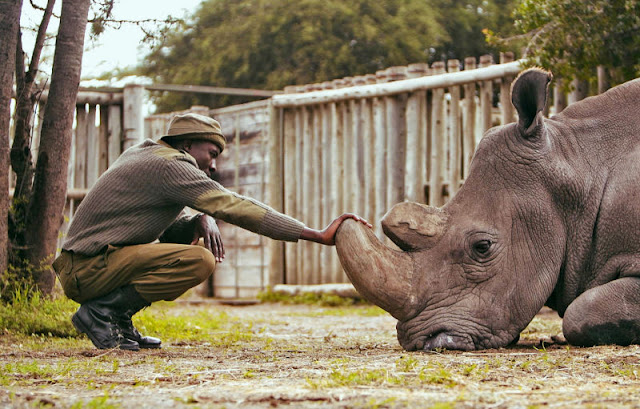 James Mwenda has a front row seat to the spectacle that is the human-driven extinction crisis. Day after day he checks on, feeds, cares for, and often just hangs out with, the last two remaining northern white rhinos on the planet.

The young conservationist has spent four and a half years with Ol Pejeta Conservancy in Kenya where he is the principal caretaker of Fatu, a 19-year-old northern white and Najin, her 29-year-old mother. Najin’s father was Sudan, the last remaining male of the subspecies, who Mwenda also cared for before the decision was made, just over a year ago, to euthanize him due to complications brought about by old age.

The passing of Sudan made headlines around the world, but the loss was very personal for Mwenda, who upon leaving high school was not able to attend university but has since achieved what he calls his childhood dream of working in conservation. Now, Mwenda is on a mission to be Sudan’s “voice around the world”, which is why he recently made a first-ever visit to the UK with the help of the international NGO Helping Rhinos.


“It’s really hard work out there on the ground, protecting the animals, it’s more like a war.”

It was a packed trip. When Earther met up with Mwenda earlier this week—in the lobby of a motel near Derbyshire’s cricket ground—he was preparing for a series of meetings and presentations. The days before had involved educational appearances at schools as well as an appearance on national television, and the event was culminating Thursday night with a fund and awareness-raising talk at London’s prestigious Royal Geographical Society.

In many ways the experience was a different world for Mwenda, and perhaps even a little nerve-wracking. But it has nothing on the pressure of his day job. 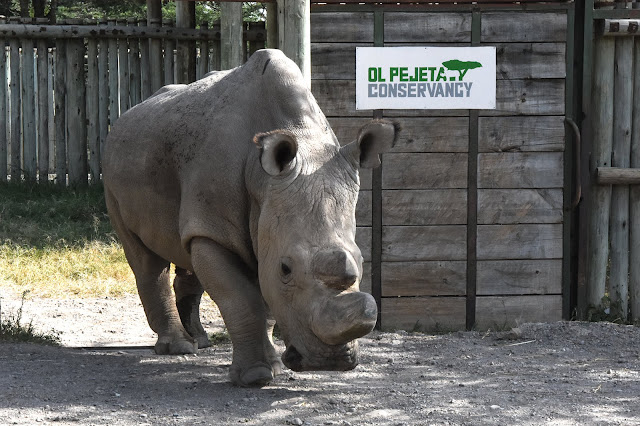 Sudan was one of four northern whites relocated to the Ol Pejeta Conservancy in Kenya from a zoo in the Czech republic. it was hoped a more natural environment would encourage them to breed

“It’s really hard work out there on the ground, protecting the animals, it’s more like a war,” Mwenda told Earther. The enemy in that war? The incessant demand for rhino horn, chiefly from Asia, that has eliminated the northern white from its native habitat in central Africa while decimating black rhino populations and placing constant pressure on the southern white.

Fatu and Najin, along with the males Sudan and Suni (who died of natural causes in 2014) were relocated to their spacious home in Kenya from a Czech zoo in 2009. Mwenda spends so much time with the two surviving females that he refers to them as “his girls” and some people joke Fatu is actually his girlfriend. He feels a “great responsibility” in caring for them, he said.

That responsibility involves monitoring their health, feeding and washing them, and generally making sure they are safe. It may be hard to believe, with the species literally on its last eight legs, but around-the-clock armed guards are still needed as, given half a chance, people would still try and do them harm.

Mwenda is also one of a number of trained rangers monitoring and protecting rhinos across the wider Ol Pejeta reserve, which covers 90,000 acres and is home to the largest black rhino population in eastern Africa. He believes Kenya has been doing “slightly better” in terms of the number of rhinos it has been losing to poachers compared with countries such as South Africa, where an around 2 rhinos a day may be lost (albeit with a larger number resident). He ascribes that to an improved awareness.

“We have not lost a rhino in more than 18 months to poaching,” he said. “But because we now have 120 rhinos [across the reserve], it is more of a threat than a success. Everyone knows there is a big concentration of rhinos there now, so we need to invest more in security and technology expertise. It’s about being vigilant, investing, community empowerment and raising awareness.”


“These animals deserve to exist.”

The latest technology—the fruit of Helping Rhinos’ fundraising in the US and UK—is a mobile vet unit, that allows sick or injured animals to be treated speedily. In an ideal world the rhinos would be left to their own devices, but Mwenda says with such an endangered species that is not feasible.

“We make sure we spot a rhino every day, but we operate in a way that we are out in the ground monitoring what they are doing but causing minimal disturbance,” he said. “There is a whole ecosystem to protect, lions and elephants, so we try to avoid confrontations.”

The northern whites, meanwhile, are so close to the brink that direct intervention has been the only option for years. In fact, the idea with bringing two of the last males and females to Ol Pejeta was that a move to a more natural habitat would get the sexual mojo back and keep the species breeding.

But over the years, it has become clear neither female rhino would be capable of carrying a pregnancy through a full and arduous 16-month term and Mwenda, who looks after them daily, doesn’t think it would be fair to do so.

“It has been such a long time since Najin gave birth, there is no knowing if she could carry a pregnancy again and also has problems with her back legs meaning she has trouble walking,” Mwenda said. “The younger one Fatu has a problem with her uterus. The vet says it is correctable, but really how can you burden a single rhino with saving an entire subspecies?” 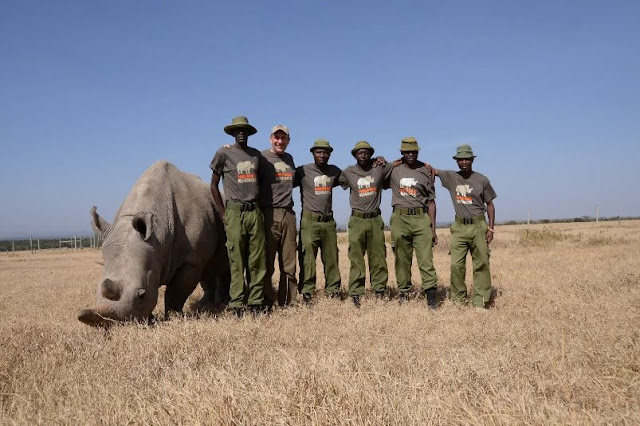 Members of the Helping Rhinos team with rangers at Ol Pejeta Conservancy in Kenya. The NGO is one of the parnters helping to raise funds to protect and care for the rhinos

Mwenda now hopes the northern whites can be saved by science. Scientists from Germany, the US, the Czech Republic and elsewhere are hoping to use harvested eggs and tissue cultures, as well as sperm frozen from a number of males, to revive the subspecies. But this is a hugely expensive undertaking and one with no guarantees. It is estimated that a pure northern white calf born to a southern white surrogate mother could be the best part of a decade away.

Add in the slow breeding rate, the potential harm the invasive process of harvesting eggs from Fatu or Najin could exact, civil wars in places such as the DRC and South Sudan (their former range) and the simple fact rhinos are hypersensitive to their environment and it is likely to be generations, if at all, before northern whites are in sustainable numbers in their natural habitat again.

Mwenda believes the synthetic biology research currently underway to rescue the subspecies will be worthwhile no matter what happens, though. “It could be vital for rhinos at large, be it northern whites, Javan or Sumatran,” he said. “It’s really worth doing it in the long run and these animals deserve to exist.”

Meanwhile, he intends to keep Sudan’s memory alive. But after speaking to a full house in London Mwenda was keen to get home, as his girls would be missing him. 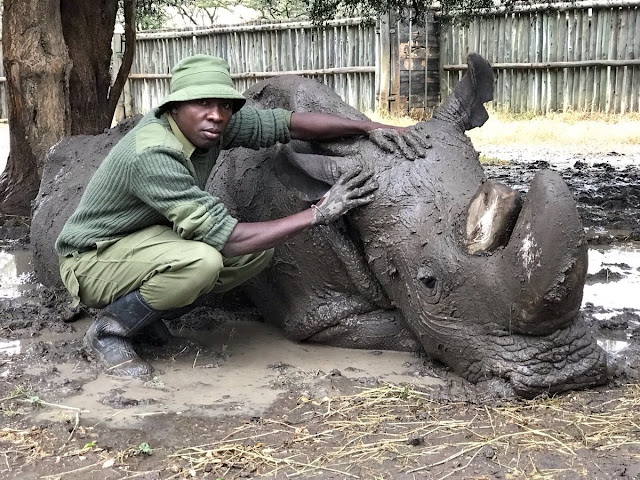 James Mwenda has been at Ol Pejeta for nearly 5 years. He says its was a childhood dream to work in conservation.