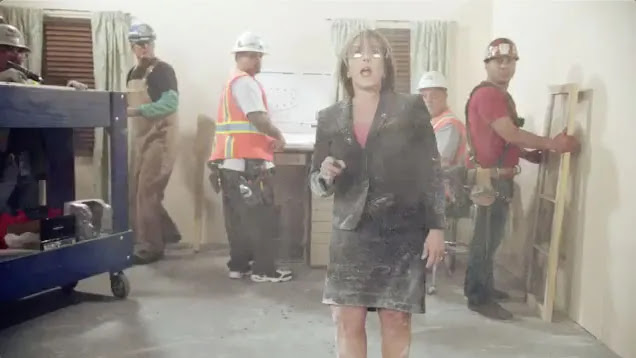 After the president's State of the Union address, New Mexico's governor released her own address about the border wall. The goofy video has since gone national and viral.

The Twitter video has now been viewed hundreds of thousands of times. The governor said she filmed it months ago and just decided to release it last night.

"I'm Michelle Lujan Grisham. New Mexico is 49th in unemployment and 50th for schools and we have to bust through some walls to make changes," said the governor, before running through a wall in the campaign ad.

Gov. Lujan Grisham was trying to show she'll run through walls for New Mexicans, but now the video is serving a new purpose. Tuesday night, she tweeted the video, which was shot during her campaign but never released. She makes campaign promises then takes a parting shot at the president.

"And here's what I think of Trump's wall," the governor said, before running through another wall.

She decided to release the old video Tuesday night to take a jab at President Trump's comments about the border wall in his State of the Union address.

"I am asking you to defend our very dangerous southern border," said President Trump during the address. He brought up the border wall often in the speech.

"Releasing that was really about pushing back, if you will, breaking through," said Gov. Lujan Grisham.

Since the release, Twitter users can't get enough of it, with people tweeting things like, "In heels, I salute you," and predictions our governor will be drafted into pro football.

There are also critics posting tweets like, "Great case made here for stronger walls," and, "This is one of the cringiest ads I've ever seen."

Newsweek and The Hill have already run stories on the video The ad has also been featured on national news outlets including FOX News and MSNBC. Trevor Noah of the The Daily Show even reacted to it. Of course, it was paid for by campaign funds.