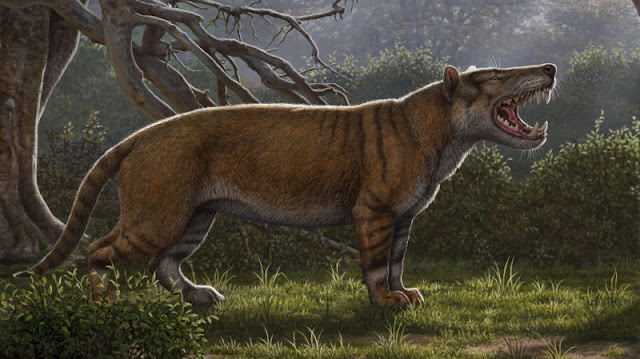 New research describes the remains of a gigantic, four-legged mammalian carnivore that terrorized Africa some 22 million years ago.

The name of this formidable creature is Simbakubwa kutokaafrika, which translated from Swahili means “big lion coming from Africa.” But this was no feline—it belonged to an extinct group of mammals known as hyaenodonts, which have no close relation to any species of mammalian carnivore living today. Larger than a polar bear, and with a head as big as a rhino’s, Simbakubwa spent its time as an apex predator in Eastern Africa around 22 million years ago, eventually going extinct under mysterious circumstances.

Its fossilized remains were discovered in 1980 at an important site in western Kenya called Meswa Bridge. The researchers who found the fossils were actually looking for evidence of ancient apes. Disinclined to study the fossils further, the researchers placed the specimens, which included some cheek bones, upper and lower teeth, bits of jaw, a heel bone, and several claws, in a drawer at the National Museums of Kenya, where they sat ignored for decades.

In 2010, paleontologist Nancy Stevens from Ohio University was working on fossils collected from Meswa Bridge when she stumbled upon the collection in the drawer. Three years later, paleontologist Matthew Borths, now a National Science Foundation postdoctoral research fellow in the Stevens Lab at Ohio University, did the same, prompting the two to collaborate on a detailed investigation of the fossilized pieces. Their research was published today in the Journal of Vertebrate Paleontology. 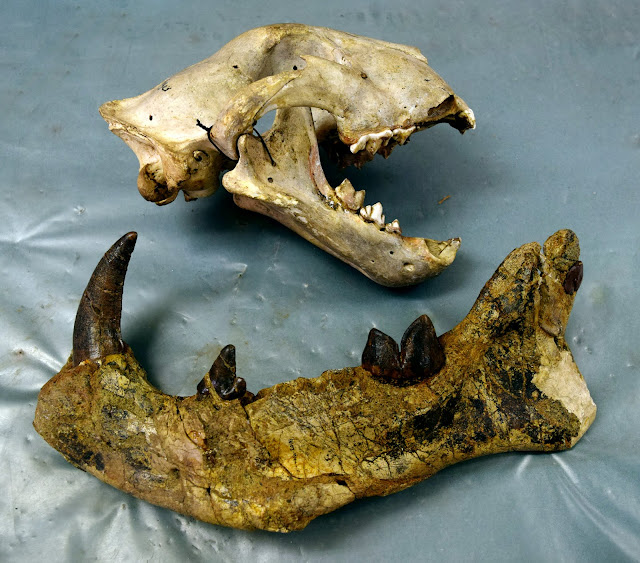 Some of the fossils discovered of Simbakubwa.

“Discoveries like this one underscore the importance of museums as troves of information about our planet’s past,” wrote Stevens in an email to Gizmodo. “Understanding large-scale patterns of how organisms respond to environmental change through time can offer insights into ecosystem fragility and resilience in the modern world.”

“Though they occupied meat-eating roles in the ecosystem, they weren’t closely related to modern carnivores. Not even hyenas,” explained Borths in an email to Gizmodo. “The name ‘hyaenodont’ simply means ‘hyena-like tooth’ but their teeth are actually quite different from a hyena’s. Hyenas, lions, and wolves only have one pair of scissor-like teeth on each side of the jaw to help them slice through meat. Hyaenodonts had three. That’s a lot of slicing for one jaw.”

“The canines were the size of bananas and about 10 cm [3.9 inches] of that was poking up out of the jaw to grab prey,” said Borths. “The meat slicing teeth at the back of the jaw were palm-sized—about as long as a smartphone is wide.” 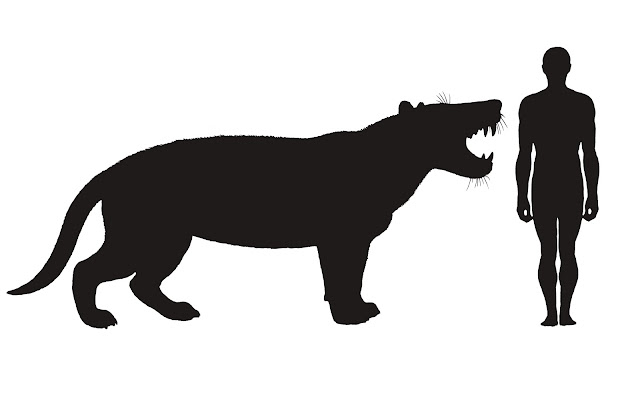 Its environment likely consisted of a patchy forest habitat with clumps of trees and some open spaces between, explained Borths. Not quite jungle, but not quite grassland. Around the same time, an early ape known as Proconsul was living in the trees, while anthracotheres (tall and slender hippo-relatives), elephant relatives, and giant hyraxes (imagine a huge marmot) foraged on the ground.

“Simbakubwa probably hunted anthracotheres, elephants, and hyraxes by stalking them rather than chasing them over long distances,” said Borths. “The ankle of Simbakubwa indicates an animal built more for springing than for loping.”

Looking ahead to future research, Borths and Stevens are hoping to find more fossils of Simbakubwa, and to better understand the dynamic environment in which it lived and eventually went extinct. This hyaenodont was alive at the beginning of an important geological and evolutionary period in which Africa, once isolated, merged with Eurasia owing to tectonic movements. This resulted in a massive exchange of animals and plants.

“That’s a lot of change,” explained Borths, “Determining the primary drivers that lead to the extinction of hyaenodonts 9 million years ago has important implications for how we understand the threats faced by modern carnivorous mammals like lions and polar bears.”

To which he added: “Hyaenodonts were remarkably adaptable, but they ultimately went extinct. With more information we hope we can help conservation biologists conserve modern carnivore populations before they meet the same fate as Simbakubwa’s relatives.”