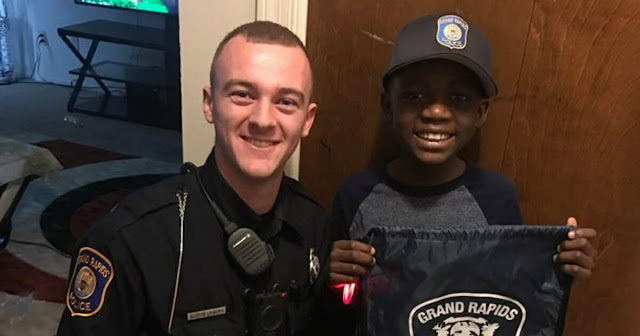 Police officers are known for their keen observational skills and attention to detail; they are always on the lookout for potential dangers and evidence. But these skills can be useful for scouting out more than just clues.

In a recent act of everyday heroism, 22-year-old police officer Austin Lynema noticed right away when someone needed a friend.

Lynema was driving through a Grand Rapids neighborhood on Feb. 22 when he saw a little boy chasing after a school bus, according to WOOD-TV.

Thomas Daniel, 9, was crying when Lynema approached him and asked if he needed help. An avid student, the little boy was crushed at the thought of missing a day of school.

“I started crying because I missed the bus,” Thomas told WOOD-TV. “I wanted to get to school really fast so I can do my work at school.”

Thomas’ mother did not have a car, so Lynema asked her permission to drive Thomas himself, and did everything he could to cheer the boy up.

“Once we showed up to school, my lights were on and everything … He was all grins,” he told CNN.

Lynema, sensing that there was more to Thomas’s story, found out that his new friend had been having trouble with bullies at school and that he was worried no one would show up to celebrate his birthday that afternoon.

The police officer decided to surprise Thomas at his party and even brought his partner along with him. But when the two officers arrived, they realized that no one else had come. Not only this, but Thomas had no presents and no birthday cake.

In spite of this, he was thrilled that Lynema and his partner had come to help him celebrate.

“I was so happy to see Austin,” Thomas told WOOD-TV.

The policemen decided then that they had to do something special for this sweet little boy.

The next morning, Lynema and several other officers purchased Krispy Kreme Doughnuts and threw Thomas another birthday bash.

“We weren’t going to let a 9-year-old not have a party,” Lynema said, according to CNN.

Since forming a friendship with Lynema, Thomas has declared that he wants to be a police officer when he gets older. The connection has blessed Lynema, too.


“As an officer, you meet thousands of people and half the time you don’t ever see these people again,” he said. “But I’m glad that I get to see Thomas again and again.”

The unlikely friendship has warmed the hearts of the local community. Since his birthday party, CNN reports that Thomas has made some new connections at school and will be attending a friend’s party with Lynema by his side.